Record 1.  This is a death record of (Martin) John William Buchholz's father, Martin Jochim Heinrich Buchholz who died on the 19 January 1864,  he was a daylaborer of Danneborth, Germany and he was in born Gerdshagen, Germany (left column states his name).  He was 66 years 4 months and 4 days old and died of pneumonia (center colums)  Martin Jochim Henrich Buchholz's father was Franz Christian Buchholz, a daylaborer of Gerdshagen, Germany - His mother was Anna Maria Sophia, nee Heuckendorf (right colum states parents name).   Two spellings are mentioned in this record - Buchholz/Buchhold - Danneborth, Germany and Gerdshagen, Germany are a few miles apart. 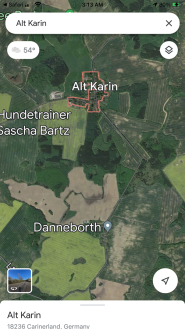 A German map showing that Danneborth and Alt Karin are only about one mile and a half apart.  The Buchholz's lived in Danneborth, Germany and were baptized in Alt Karin, Germany. 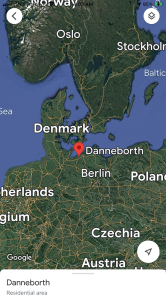 Danneborth, Germany where the Buchholz's came from is in the northern part of Germany by the Baltic Sea and close to Denmark. 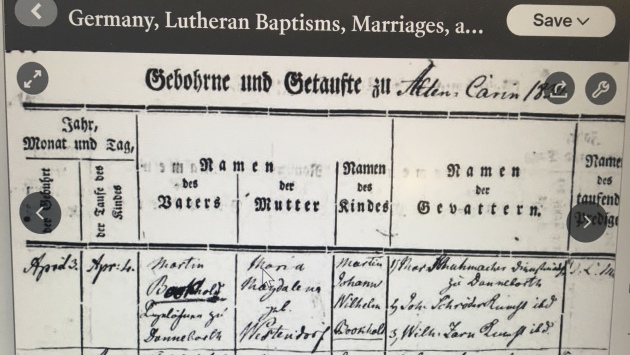 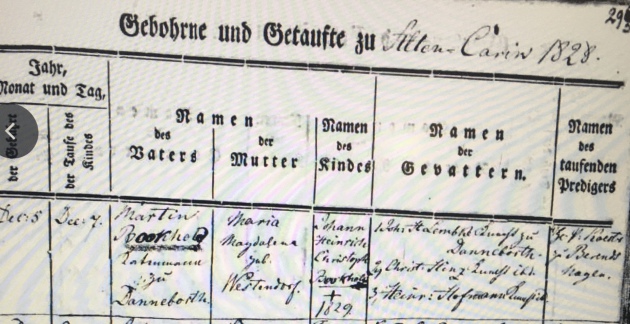 I found another church baptism of Martin John William Buchholz's brother, Johann Heninrich Christoper Bookhold, son of Martin and Maria Magdalena Westendorf Bookhold of Danneborth, Germany who was born December 5, 1828 and baptized on December 7, 1828 in Alt Karin, Germany but died on June 30 and was buried on 3  July 1929 in Danneborth, Germany. He was six months old.

Record 2.  This is a copy of (Martin) John Willliam Buchholz's daughter, Wilhelmine Christine Johanna Bookhold (Buchholz) german baptismal record (right column shows her name),  it states she was born 24 August (1868) and was baptized on the 3 September (1868),  Her father is Martin Johann Wilhelm Bookhold (left column shows his name)and he was a daylaborer of Danneborth, Germany.   Her mother is Ernestine Maria Christine born Ohde (center shows her name)  Interesting Buchholz/Buchholtz shows as Bookhold.  The Lutheran Church was in Alt Carin (Alt Karin) Ritteramt Bukow, Mecklenburg-Schwerin, Germany.  Danneborth and Alt Karin is within a couple of miles from each other in Germany.

Researched by Susan Keferl a Great-Great-Granddaughter of Mary Buchholz Trost. 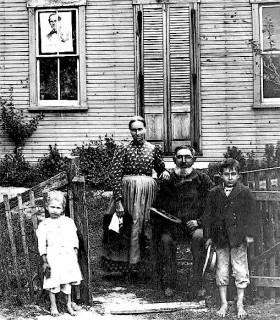 The photo is of John William Buchholz with his wife, Mary Oda Buchholz at their Ohio home.  The two children, Edward and Mary Buchholz/Bucholz, are children of their son, Charles Buchholz/Bucholz.   Also, during the 1900 U.S. Presidential Elections it was very popular to put the Presidential and Vice Presidential Candidate that the family chose to vote for in the front window of the family home.  On display in the Buchholz home window is a photo of the Democratic Party Presidential Candidate William Jennings Bryan and the Vice President Candidate Adlai E. Stevenson.  photo identified and owned by Helen (Buchholz) Smith.

Record 3.  This is a copy of the German spelling of John C. Bucholtz (son) and John W. Bucholtz (father) found in the St. John's Lutheran Church Record book of Covington, Ohio.  They were two of the first members of the church.  It was dated 27 January 1886. 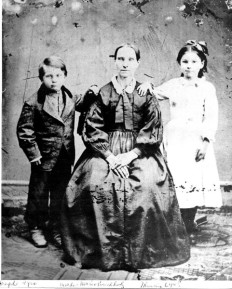 The photo is of Mary (Oda) Buchholz with her two younger children, Minnie (Wilhelmine) and Joseph Buchholz. The photo was taken in Ohio. U.S.A. Identified and owned by Helen (Buchholz) Smith

John and Mary had the following children:

The remains of John Buchholtz of Darke County were brought here on Saturday of last week for interment.  The subject of this short sketch was born in Germany, April 3, 1830.  In 1864 he was united in marriage with Miss Mary Oda.  They came to America and located on a farm in Montgomery County in 1869 at which place they resided until 1879.  They then moved to Darke County where they continued to reside until the date of his death which occured on May 17, 1906 at the age of 76 years, one month and ten days.  Mr. Buchholtz was blessed by having religious parents and was baptised when a child and at the tender age of fourteen years was confirmed and made a full member of the Evangelical Brethren Church.  Fore more than thirty years he has been a faithful, modest and yet loyal member of that church.

He was unassuming and yet always firm in his convictions of right which no doubt led the minister who preached his funeral sermon to take for his text the words:  "I have fought a good fight; I have finished my course, I have kept the faith." Rev. Mittler in his discourse made a strong showing of what a good christian fight means and what an ardent task it is to finish a course as it should be finished and to keep the faith as no one other than a christian can keep it.  Our subject was personally known by Rev. Mittler as a plain and faithful christian gentlemen.

A large audience of sympathizing friends and neighbors gathered  at the Chrisitan church at 11 o'clock Saturday to sympathize with the grief stricken family.  The music for the occassion was furnished by J. L. Rector, and five lady members of the Christian church choir.  The  cause of death was asthma and dropsy.  A faithful and loving wife, six children, thirty eight grandchildren and fourteen great-grandchildren besides many other more distant relatives and a great host of friends are left to mourn his being called away.

We noticed that about all the surrounding towns were represented at the funeral, Covington, Ohio; Bradford, Ohio; West Milton, Ohio; Tippecanoe City, Ohio; New Viena, Ohio; Ludlow, Ohio and Troy, Ohio; we may say that the great number in attendance at the funeral in the best of evidence that Uncle John was held in very high estimation by all his acquaintances.  Interment was made at Pleasant Hill Cemetery by funeral director R.R. Whitmer.  Rev. Mittler, who conducted the funeral, was formerly the pastor at Covington, Ohio but is now at Anna, Ohio.

in a "Household List" the names of each person present in the home at the time of enumeration.  Household members who were not physically present were recorded in an addendum.  Approximately half a million people were enumerated in this census.  The following information was recorded about each person:  First and last name, Gender,year of Birth, Religious Affiliation, Marital Status, Occupation or Social Standing, Citizenship, if a visitor, why in the area, and Distinguishing Physical Characteristics.  --  Johann and Marie Buchholz lived at house number 15 in the district (village) of Danneborth, Ritteramt (R.A. - Knight District) Bukow, Mecklenburg-Schwerin, Germany.  Johann Buchholz was born in 1830 and was a daylaborer and a Lutheran.  Marie Buchholz was born in 1829 and also a Lutheran.  Their children were: Carl born in 1866; Heinrich born in 1864; Johann born in 1855; and Marie born in 1853 and all four children were Lutheran.

Also in 1869*** The family of John and Mary Buchholz departed Hamburg, Germany for New York on 31 October 1869 and they traveled on the shipped named the Doctor Barth which was a Segelschiff type of ship. The Captain's name was Bockwoldt.  Their residence was Danneborth, Mecklenburg, Germany.   They arrived at Castle Island, located on the tip of Lower Manhattan in New York City,  the end of December of 1869.  Traveling with the family was Mary's father, Frederick Oda.

***1870-1873***After arriving in Casle Gardens they moved on to Harrisburg, Ohio - today it is Englewood, Ohio (12 miles north of Dayton) and stayed with Marie Oda Buchholz's brother, John Oda and his family for six weeks, before moving on and settling in Dry Branch, Ohio for three years.

***In 1877***The following is John William  Buchholz's first and last papers of naturalization.  The year is 1877 he is 47 years old.  The naturalization papers state the following:  The State of Ohio, Dark County - Is hereby certified that on this day John Buchholz a native of Germany aged 47 personally came before the Judge of the Court of Probate of said County, being duly sworn upon his solemn oath declare that it it bona fide his interest to become a citizen of the United States, and to renounce forever, all allegiance and fidelity to any foreign Prince, Potentate, State, or sovereignty whatever particularly to William Emperor of the Germanys - In testimoney whereof, I have hereunto set my hand and affixed the seal of said Court, at Greenville, Ohio, this 14th day of December A.D. eighteen hundred and seventy seven, J.A. John, Judge of Probate

***1906***DARKE COUNTY, OHIO PROBATE COURT**JOHN W. BUCHHOLZ'S WILL -  Application for Probate May 26, 1906, In The Matter of The Last Will and Testament of John W. Bucholtz, Deceased.  In the name of the Benevolent Father of All.  I, John W. Buchholtz, of Franklin Township, Darke County, Ohio, do make and publish this my LAST WILL AND TESTAMENT.   Item 1 - I give and bequeath to my beloved wife, Mary Buchholtz, in lieu of her    the farm in which we now reside, situated in the County of Darke, in the state of Ohio, and in the Township of Franklin and described as follows:  The West half of the South East quarter of the South West 1/4 of Section Sixteen (16) Township Eight (8) Range Four (4) East, containing Twenty (20) acres of land more or less during her natural life:  all the stock, household good, furniture, provisions, and ?goods and chattles which may be thereon at the time of my decease, I give and bequeath to her absolutely: (she however selling so much thereof as may be sufficient to pay my debts)  At the death of my said wife, the real-estate aforesaid, I give and devise to my six (6) children and their heirs, MARY TROST, JOHN BUCHOLTZ, HENRY BUCHOLTZ, CHARLES BUCHOLTZ, MINNIE NESLER AND JOSEPH BUCHOLTZ - share and share alike.  In testimony hereof, I have hereunto set my hand and seal, this 1st day of January 1906.  JOHN W. (X Mark) BUCHOLTZ  -  Signed and acknowledged by asaid John W. Bucholtz, as his last will and testament, in our presence, and signed by us in his presence.  David Kreider and Isaac H. Cool.  Signed and acknowledged in my present this 1st day of January 1906  H. H. Bireley.

**The STATE OF OHIO, DARKE COUNTY, ss.  In the probate Court of Darke County, O.JOHN NEISLEY being duly sworn says that JOHN WM. BUCHOLTZ late a resident of the Township of Franklin in said County, died testate, on or about the 17th day of May A.D. 1906; that the last will and testament of said decedent has been duly admitted to probate and record in Darke County Probate Court; that said decedent died leaving MARY BUCHOLTZ his widow, who P.O. Box is Arcanum, Ohio RFD#2 and the following persons his only next of kin:  MARY TROST, Daughter, of Troy, Ohio RFD#3; JOHN BUCHHOLTZ, Son, Bradford, Ohio RFD#2; HENRY BUCHHOLZ, Son, Bradford, Ohio RFD#3; CHARLES BUCHHOLZ, Son, Greenville, Ohio RFD#1; MINNIE NIESLEY, daughter, Bradford, Ohio RFD#3; JOSEPH BUCHHOLZ, Son, Arcanum, Ohio RFD#2. That non of the above named are children of said decendent are under 15 age at the time of his decease.  The undersigned asks to be appointed Administrates with Will annexed with the Will annexed, upon the estate of said decedent, and on his oath aforesaid says, the amount of personal property will be $250.00 And of real estate about subject to lifes estate $2,000.00. 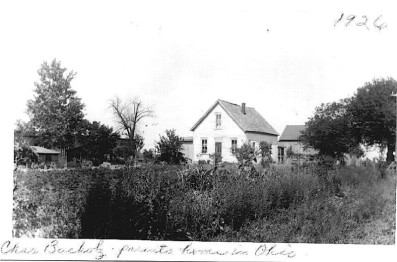 This is a photo of John and Mary (Oda) Buchholz's home in Ohio.  The photo was taken in 1926, eighteen years after Mary passed away.  Her children sold the farm after she died but one might still imagine what the property looked like while they were alive.  The house, barn and farm buildings were part of the families tobacco farm. 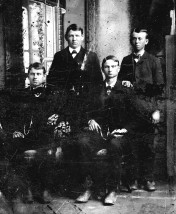 This is a photo of the four sons of John and Mary (Oda) Buchholz. left to right - sitting: Charlie Buchholz/Bucholz and Joseph Buchholz; standing: John Buchholz/Buchholtz and Henry Buchholz. The photo was taken in the 1890's. 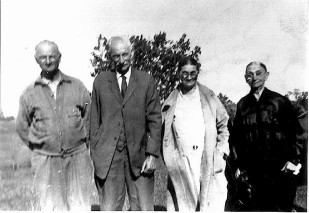 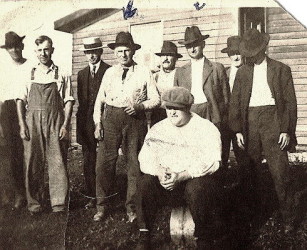