Joseph P. Rigg was a minister of the UB Church in North Creek, Putnam County, Ohio.

"Obituary in Putnam County, Ohio Sentinel February 22, 1894"  -  North Creek - The many friends of Joseph P. Rigg will be pained to learn of his death which occured on last Monday.  The circumstances connected with his death are as follows:  On Saturday, February 10th. Mr. Rigg went to Hartsburg in this county to attend quarterly conference of the U.B. Church telling his family he would be home Sunday or Monday.  Monday being a stormy day his family did not become alarmed but as he did not come home on Tuesday a search was commenced.  He was found on Thursday about one half mile north of Wisterman, in a snow drift,  after having laid there three days and three nights.  It is supposed that he was killed by the St. Louis express, due here at half past seven in the morning, but was two hours late that morning.  His funeral was conducted by Rev. Buckingham of Kieferville, on last Sunday, and was one of the largest ever seen in this part of the country.﻿

Joseph and Mary Ann had the following children: 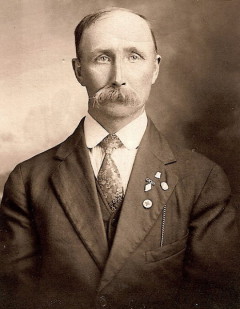 The photo is of John Thornton Rigg

John was a railroader and a member of the abandoned Ev. United Brethren Church in North Creek.  Prior to his death in 1952, John had lived at the Anderson Nursing Home, Napoleon, Henry County, Ohio for three years and had been ill for about two of those years.  John died at Heller Memorial Hospital in Napoleon.  Julia died prior to her husband.  John is buried in Kieferville Cemetery, Palmer Township, Putnam Cuinty, Ohio.

John and Julia had the following children: 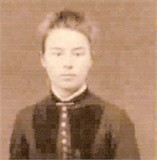 This is a photo of Laura Rigg.

2.  Laura M. married Lewis Jenkins on 15 December 1890?  Witnesses to the wedding were Ezekiel Jenkins and Rev. G.O. Rigg.  Lewis was born in November 1864 in Pennsylvania.  In 1914 the family moved from Ohio to Tekonsha, Calhoun County, Michigan.  Laura and Lewis lived the remainder of their lives in Tekonsha.  Laura was a housewife and Lewis was a grocery store owner.

Laura and Lewis had the following children:

e.  Joseph Ezekiel Jenkins was born 11 November 1900 in Continental, Putnam County, Ohio.  On 26 June 1926 Joe married Marguerite Neva Cameron.  Marguerite was born 16 October 1907, thte daughter of Neil and Flora Cameron.  Joe moved to Tekonsha, Calhoun County, Michigan in 1914 and was employed with Randall Milling Company in Tekonsha from 1923 to 1938.  Joe owned and operated Jenkins' Standard Oil Station in Tekonsha from 1938 until retiring in 1969.  Joe was a former Chief of the Tekonsha Fire Department on which he served as a volunteer for many years.  Marguerite taught in a oneroom school house and also worked as a retire clerk.  Joe died 29 September 1980 and Marguerite died 5 May 1993.  Joe is buried in Riverside Cemetery in Tekonsha, Michigan. 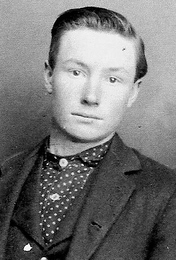 The photo is of Alvin Jasper Rigg

Alvin and Hazel Rigg had the following children: