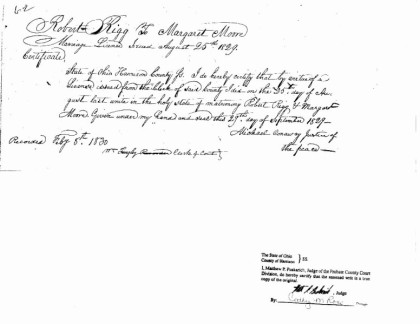 Robert  Rigg was born 1805 in Pennsylvania to the parents of George and Mary Rigg.  He died 11 September 1863 in Alaiedon twp., Ingham County, Michigan.

Robert Rigg married (1) Loveice Fessel on 23 September 1824 in Harrison County, Ohio.  They had a daughter, Sarah Rigg who was born 31 August and died 10 October 1884.  Loveice passed away.

Robert Rigg married (2) Margaret Moore on 25 April 1829 in Harrison County, Ohio.  They had the following children:

-----Robert and Margaret (Moore) Rigg came to Michigan from Lykens Township, Crawford County, Ohio where they lived for a short time.   Before that, they lived in Perry Township, Carroll County, Ohio (formerly North Township, Harrison County, Ohio) where their ten children were born.  Their children's names were James, Austin, Leslie, George W., Meredith, Thornton, Martha Jane, and Hiram. A baby girl, Matilda and an infant son, Ephraim died when infants.

Three of Robert and Margaret's sons, Thornton, Meredith and Washington joined the Civil War early in the campaign.  All three sons died within five months of each other in 1862. I am sure Robert and Margaret were devastated.  Robert died within a year, on September 11, 1863.  One of his sons, Washington, left a wife named Martha, and unborn child who was named Olive; she was born in November of 1962. 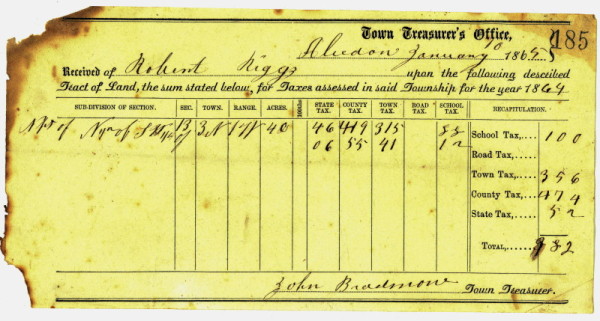 The document is of an original copy of a Tax Assessment dated January 10, 1865 from the Alaiedon Town Treasurer's Office, received of Robert Rigg upon the following described tract of land (which was located on Every Road corner of Holt Road in Mason, Michigan) the sum stated as $9.32 for taxes assessed in said township.

----George Rigg,  Robert Rigg and Joseph Rigg voted in an Election that was held at Solomon Littles, North Township, Harrison County, Ohio on the twenty eighth day of May in the year of Our Lord one Thousand Eight hundred and thirty one (1831)  for the purpose of electing two Justices of the Peace.

----According to the Probated Records of Harrison County, Ohio -- To William Tingley, Clerk of court of Harrison County, Ohio:  I do certify to you that I have given my consent for ROBERT RIGG, who is under age, to be married to LOVEICE FISSELL. SEPTEMBER the 20th, 1824 - George Rigg - Attest: William Beatty and Anthony Fissell.

----According to Marriage Permissions, Harrison County, Ohio 1813-1852. Authors: Dorothea Greer and Thelma Bolitho - Robert and Thornton Rigg were attendants to the marriage of MARY ANN RIGG and EPHRIAM STEWART on 2 April 1832.  MARY ANN was the daughter of GEORGE RIGG.

----DEED - ROBERT RIGG TO SAMUEL WEBB - VOLUME 1 PAGE 1 --- COUNTY OF CARROLL, STATE OF OHIO
ON THE 14TH OF MARCH 1833 Robert and Margaret Rigg sold their tract of land which contained 13 acres to Samuel Webb.  The property was located on the east half of the southeast quarter of Section 29 in Township 12 of Range 5 being the same tract of land conveyed to the said Robert Rigg by Benjamin Tolan and wife.  Robert and Margaret sold this property to Samuel Webb for $50.00.

----DEED - GEORGE RIGG, MARY RIGG, ROBERT RIGG, MARGARET RIGG, THORNTON RIGG TO SAMUEL WEBB - VOLUME 1 PAGE 1 --- COUNTY OF CARROLL, STATE OF OHIO
ON THE 14TH OF MARCH 1833 George, Mary, Robert, Margaret and Thornton Rigg sold 80 acres of land to Samuel Webb which was located on the east half of the northeast quarter of  Section 28 in Township 12 of Range 5.   GEORGE & MARY RIGG, ROBERT & MARGARET, AND THORNTON RIGG signatures are on the deed, they sold the 80 acres for $450.00 to Samuel Webb.

----DEED - ROBERT AND MARGARET RIGG TO SAMUEL HEIDY - VOLUME 11 PAGGE 637 ---- PERRYSVILLE, COUNTY OF CARROLL, STATE OF OHIO
ON 12TH OF OCTOBER 1848 Robert and Margaret Rigg sold their property to Samuel Heidy.  The property was Lot number (Eleven) 11 and (Twelve) 12 in the Town of Perrysville as laid out by Mahlon Stewart and Recorded in the Recorders office of said Carroll County.  Robert and Margaret sold the two lots for $165.00.

ON MAY 19, 1848 THE NEWSPAPER, "THE ZANESVILLE COURIER"  HAD TWO INTERESTING ARTICLES IN WHICH "ROBERT RIGG" AND HIS BROTHER-IN-LAW'S FATHER, MALEN STEWART AND ROBERT'S SON-IN-LAW SAMUEL BARRICK, WERE MENTIONED, they are political writings and they read as follows:
PEOPLE'S CONVENTION - TO THE PEOPLE OF OHIO - Fellow Citizens: -- A great crisis is at hand.  The war with Mexico must result-if, before you read this call, it shall not have resulted-in the acquisition of extensive territories by the United States.  These territories are now free territories:  but it is demanded by the Slave Power of the Country that they shall be, by the National Government, made slave territories:-that the trade in living men and women shall be permitted in them by the national authority; that free labor and free laborers shall be virtually excluded from them by being subjected to degrading competition with slave labor and slave laborers; and, finally, that they may be erected into Slave States, with slave representations in Congress, and in the Electoral Colleges.
It is strange, but unhappily true, that prominent men in each of the two great parties of the country, have been found ready to submit to this degrading demand. Mighty efforts are now made to force upon both parties, nominations, for the Presidency and Vice Presidency, of candidates who will favor, either by active co-operation, or silent connivance, the designs of the Slave power.  These efforts will be successful, unless the friends of Freedom arouse themselves, and act in concert.  They may be successful, notwithstanding such action.  Also, nothing will remain for true patriots, but acquiescence in the demand, or a noble struggle for victory.
It becomes us to be prepared for every event.  Should the Conventions of the Whig and Democratic parties, in May and June next, nominate candidates worthy of the confidence of non-slaveholding freeman, we shall greatly rejoice; if not, we must act as befits men, determined to resist, by all constitutional means, the extension of Slavery into territories hereafter acquired.  We ask no man to leave his part, or surrender his part views.  This call is signed indiscriminately by Democrats, Whigs, and Liberty men.  But we do ask every man, who loves his country, to be ready, if need be, to suspend, for a time, ordinary party contentions, and unite in one manful, earnest and victorious effort for the holy cause of Freedom and Free Labor.
Let us assemble in Convention, and consult together for the safety of the Republic.  Let all come who prefer Freedom to Slavery, and Free Territory to Slave Territory, and are resolved to act and vote accordingly.  If candidates shall have been already nominiated, who represent our principles.  Let us approve them; if not, let us ourselves form a ticket which we can support.
We therefore, invite the Electors of Ohio, friends of Freedom, Free Territory, and Free Labor, with distinction of party to meet in Mass Convention, at Columbus on Wednesday, the twenty-first (21) of June next, (the Anniversary of the battle of Bunker Hill,) for the purpose of considering the political condition of our country, and taking such action as the exigency may require.  And may God defend the right!

THE "PEOPLES CONVENTION."   We publish, this morning, a very remarkable document, purporting to be a call for a "People's Convention," to be held in Columbus on the 17th day of June next.  We find it in the Cincinnati Gazette of the 16th, and appended to it are the names of nearly 3,000 signers, the name of being citizens of 27 counties of Ohio.  It is said that it has been thus signed by citizens without distinction of party-though we are somewhat inclinded to doubt it as being true to any general extent.  There are forty signatures under the head of Muskingum County, of the following named citizens, but few of whom are personally known to us:
"J.R. Hunter, W. Wright, Thomas Palmer, George Hopeman, M. Coppen, Alexander Tuan, Daniel Ruan, George A. McAllester, 'SAMUEL BARRICK', Daniel Palmer, James Palmer, John Butterfield, John . Norrich, W.D. Scott, George W. McAllester, A. Buckingham, Samuel Shaw, John Weyllie, John M. Dullison, Samuel Bell, John Sall, Daniel Norich, 'ROBERT RIGG', A.R. Gladden, Jacob Gledden, 'MALEN STEWART', J.N. McAbee, G.A. Lowman, Alexander Potter, Thomas H. Cummings, Archibold Scott, S. Henderson, M. McCall, Charles Hoover, Thomas Elliott, A.A. Guthrie, Lawson Wiles, Z.M. Chandler, G. Buckingham, George Guthrie.

The Cincinnati Gazette publishes the call "at the solicitation of a large number of persons."  That journal "does not concur" in the movement, but considers it "nevertheless, as an indication of the deep interest with which the people of the State, of all parties, regard the Free Territory question," and of their determination to make it a paramount one."  The Gazette "will be glad if the nominations of the two parties shall take the question out of the canvas by presenting candidates unceptionable" on that point, and "trusts that the Whigs will name such a candidate."  But, "if the Free Territory sentiment should be disregarded" by the two parties, our co-temporary thinks that "the independent movement may become very formidable."!
By the same mail, that of Wednesday evening, we received the Toledo Blade of the 10th, which publishes the Call, and the circular which accompanied it, when first sent to Toledo.  The later is dated March 23d, and is signed by Henry Starr, Nathan Guilford, S.P. Chase, J.W. Shields, Samuel Lewis, S.F. Cary, Stanley Matthews, and E. M. Gregory. Guilford was, and we presume, still is a Whig; Starr is nothing but a Wilmot Provise man; Cary's position is at present indefinite, and, as for the rest, they are leading "Liberty-men, if we mistake not.
We regard this as a bold push on the part of the third party abolitionists, to secure the control of northern politics.  With indefinite and vague talk about "Northern Rights," They have managed to approach a few Whigs on that weak side and to secure their present co-operation. It is a a direct blow at Henry Clay and General Taylor, on the Whig side, and we may say briefly, at the Locoforce nominee, be he who he may, and we double its sincerity.  We agree with the Toledo Blade in confessing our unwillinness to believe that, if, suppose Mr. Clay were nominated and he should take the strongest Wilmot Proviso ground, Samuel Lewis and S.P. Chase would support him.
We condemn this movement, for the same reason that we find it to be our strongest objection, on one account, to Political Abolitionism .  It is, that a great good, - the question of Freedom, - is hazarded in a contest with noting like a commensurate degree of strength to maintain and secure it.  That question has been progressing, and has been, for twelve years past, and it would have taken still stronger hold upon the popular affections, had not libertyism retarded its progress.  Look at the consequences of this movement, if it be destined to amount to anything.  The two parties make nominations unacceptable to the components of the Peoples Convention, a majority of whom will be third party abolitionists.  Thereupon a North People's ticket is formed.  Election comes and the full abolition vote, a few score from the Locofocos and 1,500 or 2,000 Whig votes are given to it.  The ticket is not elected, the Locofoco ticket probably is, and the 23 electoral suffrages of Ohio are sold to the personification of doughfacism, who will be nominated next Monday, a pretty second chapter to succeed the first, in which is writ the true history of the means whereby Texan Annexation and a Mexican War were secured!

The Robert Rigg Family information researched by Jackie Rohde, History of Robert Rigg and Family from 1800,  and Yvonne Bucholz Frost.