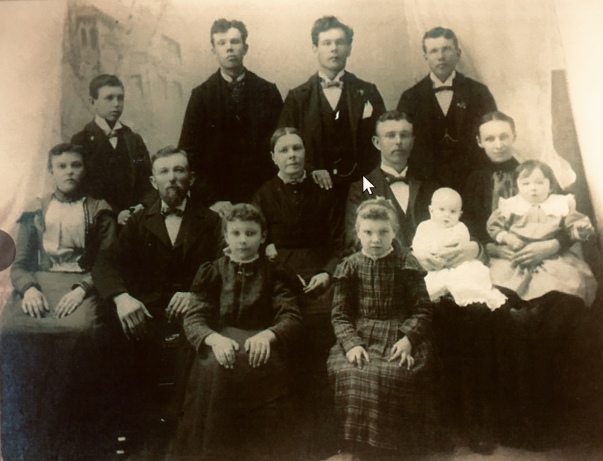 Wilhelmine Augustine Caroline Rohde was born 27 January 1851 in Coblintz/Kolentz, Germany and her parents were Wilhelm and Louise Ziehm/ Gigham Rohde (according to Wilhelmine's death certificate).

The undersigned Konigliche Regierengs - President - royal government president -herewith that until now Preunniche Prussian laborer of the Prussian state Carl Friederich Stenzel from Wollschow, circuit or district (kreis) Prenzlau, born on the 1st of November 1852 at Rothen Klempenow, district (kreis) Randow upon petition and purpose of iemigration to North America with his wife Wilhelmine Henriette Caroline Rohde born on the 27th of January 1851, and the following minors or children under the care and contro of the father.

The permit for the emigration to leave from the Prussian State is hereby granted.

The permit to leave document is valid for specially named persons with the time limit of six months losing the Prussian citizenship.  It is invalid after six months if they do not change the dwelling place.

On the 1896 Richland Township Platmap, Saginaw County, Michigan, it shows that Gustave and Wilhelmine own and operate a 50 acre farm on the corner of Dice and Steele roads in Richland Township.  Just to the north of their property on Steel Road, their son Charles Stenzel owns his own 50 acre property.

They are listed in the 1900 Richland Township, Saginaw County census owning and operating their farm.

Wilhelmine and Gustav had the following children: (most family names from the confirmation records of St. Peter's Evangelical Lutheran Church, Hemlock, Michigan)

Zion Lutheran Church in 1908, 13 years after Gustav Stenzel and others met at the Tilden School to organized to start a new church. Gustav died one year after this picture was taken.

The following information was found in the history of Zion Lutheran Church - dated 17 February 1895: "THE FIRST 25 YEARS 1895-1920 THE COMMITTMENT  Several of the people present declared that it is certainly time to found a new congregation, primarily because of their children who have so far to go to school and confirmation class.  After the matter was discussed further the list of those that were willing to join the congregation was presented.  The following were from the St. Peter Evangical Lutheran Church in Richland Township, Hemlock, Michigan.  Heinrich Scharf, Albert Schultz,     GUSTAV STENZEL, August Schultz, Franz Zastrow, August Tessin, Bernhardt Kade, Michael Blank, Herman Schultz and Peter Harms,  New members also present was Rudolph Kade, William Dankwardt and Frederick Beyersdorf.  Not present but declared a willingness to join the new congregation if organized was August Bohn, G. Bernbach, John Bluemer, W. Koeppen, Karl Kratz, W. Pommering and Jim Weiskirch."

Gustav and Wilhelmine's home is one mile to the west on Dice Road of Zion Lutheran Church. 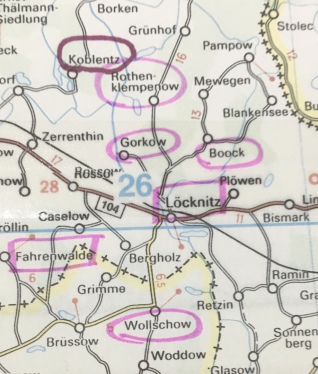 A MAP OF GERMANY WHERE THE ROHDE AND STENZEL'S WERE FROM:

The Roggows, Kraatz, and Koeppens were from Gorkow, Germany.  The towns of Gorkow, Koblentz, and Boock, were in the Kreis (districts of Randow, Province Pommern, Duetschland, and is now in Mecklenburg-Western Pomerania (federal state), Uecker Randow (district) Germany.  Just over the state line is the town of Wollschow, Province of Brandenburg, Duetschland and is now Brandenburg (federal state), Germany.  These towns are located in the northeast corner of Germany near the border of Poland, just to the east. 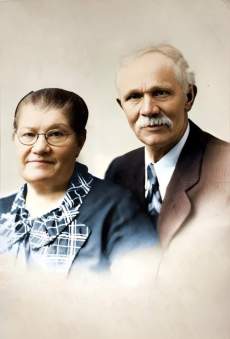 THIS IS A PICTURE OF WILLIAM AND AUGUSTE STENZEL DIENER. AUGUSTE IS A SISTER TO GUSTAV STENZEL AND EMILIE STENZEL ROHDE.

THE PICTURES IS OF EMILIE STENZEL ROHDE - SISTER TO GUSTAV STENZEL AND AUGUSTE DEINER AND HER HUSBAND, KARL ROHDE,  BROTHER TO WILHELMINE ROHDE STENZEL.