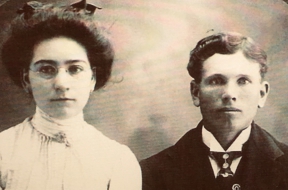 August Karl Friedrich Stenzel was born on 2 August 1880 in Wollschow, Deutschland, Germany and came to the United States with his parents in 1889.

"In a newspaper article dated 9 March 1905 from the Saginaw Weekly Courier Herald page 7 state the following:

"On Wednesday occured a wedding of August Stenzil and Rosa Kade at the Lutheran church at Iva.  Rev. Carl Mueller performed the ceremony in the presence of a company of relatives and friends that nearly filled the church.  The groom is a prosperous young farmer. The bride was born and raised in this vicinity and very popular in the circle." 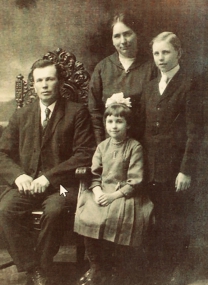 The photo is of August, Rose, Martin and Marie Stenzel

August and Rose had two children, Martin and Marie Stenzel

August had resided on his farm for 54 years and he was also a member of Zion Lutheran Church at Iva and served as Elder of the church for 45 years. 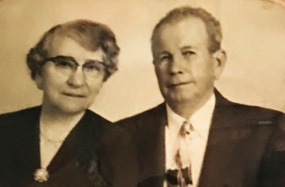 August died on 1 April 1966 at his home at 17912 Dice Rd., Hemlock, Michigan.  Rose died on 18 August 1963 at her home in Richland Township.  August and Rose are buried in the Richland Lutheran Cemetery, Hemlock, Saginaw County, Michigan.< 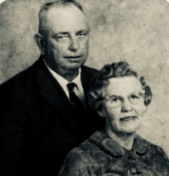 Martin and Lily had one daughter, Gertrude "Gertie" who married Don Schomaker.  They had four children; Randy, Lynette, Scott and Matthew.

Martin died on 23 June 1973 and Lily died on 15 July 2000,  They are both buried in the Richland Lutheran Cemetery, Hemlock, Saginaw, County, Michigan 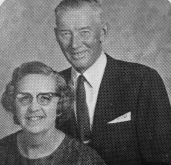 Donna Mae Neitzke was born on 19 May 1938. She married Larry K.Shimer and had two daughters.

Donna was a graduate of Breckenridge High School, Breckenridge, Gratiot County, Michigan.  Donna also attended and graduated from Valparaiso University, Valparaiso, Indiana in 1960,  Donna worked for the State of Indiana as a social worker, retiring in 2000.  She worked for the State IMPACT office as well in the Indiana Welfare Department.  Donna was a member of Pilgrim Lutheran Church.  She was active in Girl Scouts, serving as a leader of two different troops.

Donna died on 28 March 2014 and is buried in the Oaklawn Memorial Gardens, Fishers, Hamilton County, Indiana.

John Joseph Neitzke was born the 8 July 1953 in Saginaw, Saginaw County, Michigan.  He married Virginia Davis and had one son.

Growing up on a farm near Breckenridge, Gratiot County, Michigan, John always considered himself a farmer, and liked to grow things.  He enjoyed deer and turkey hunting, building woodworking, antique tractors (red ones), classical music, reading, baking and cooking, and making elaborate birthday cakes for colleagues, church members, friends and family.  He was a member of Faith Lutheran Church.

John died on 10 February 2021 at this home in Kirksville, Adair County, Missouri.