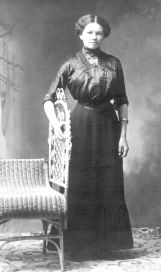 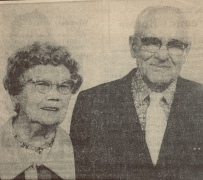 Wallace Herbert Mertz was born 2 September 1916 to Herbert George and Emma Mertz. was married to Rosaline Bluemlein on 19 August 1938 in Saginaw, Saginaw County, Michigan.  At the time of their marriage, Wallace was a Apprentice Printer. When Wallace registered for the WWII draft on 16 October 1940, he was working for Booth Newspapers - Saginaw News.

Wallace worked as a printer for the Saginaw News for 43 years and was also a member of Redeemer Lltheran church in Saginaw, Saginaw County, Michigan.

Lauren Wallace "Larry" Mertz was born 19 July 1924 in Saginaw, Saginaw County, Michigan. Larry graduated from Saginaw High School, Saginaw, Michigan in 1942. When Larry registered for the draft on 4 December 1945, he was a return Veteran. Lauren enlisted in the United States Army Air Corp on 10 December 1942 in Detroit, Michigan.

Larry retired after many years as an Auto and Leasing salesman.  He was a long time memaber of BPOE Elks Lodge, #47 and an active member of the First United Methodist Church in Saginaw, Michigan.  He also enjoyed helping the Saginaw Township Precinct with their voting.  Larry joined and graduated the Citizen's Police Academy in 2015.  He was a very gifted wood furniture restorer and enjoyed putting models together. He also enjoyed flying and had his pilot's license.

Wayne and Caroline had two children:

Wayne had a career in Industrial Sales and Management.  He was a life member of United Commercial Travelers, and also the Elks Lodge #47, where he served as a past District Deputy of East Central District.  He was a bowler, and he became an avid golfer.