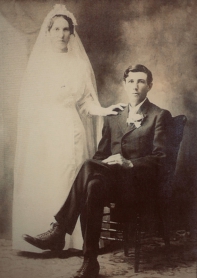 In 1916, Herman and Amanda owned 50 acres of land on Dice Road in Section six in Richland Township. On Hermans draft registration, dated 5 June 1917, he is living in Richland Township with a mailing address of Merrill, Michigan. He has a wife, three children and his mother dependent on him.  Wilhelmine Rohde Stenzel lives with Herman and his family after the death of her husband, Gustave Stenzel. In 1930, Herman is a poultry farmer and in the 1950's he is working for the Saginaw Furniture Shops in Saginaw, Saginaw County, Michigan. Herman worked there until he retired in 1959. 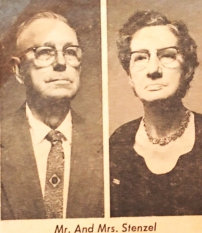 The couple have six children: Leo, Norman, Orlaf, Arnold, and Hazen Stenzel, all of Saginaw, and Harold Stenzel of Hemlock.  They also have eight grandchildren and one great-grandchild."

Leo and Selma had one son, Gary Stenzel.

Leo had worked at Malleable Iron Central Foundry Division as a pattern maker for 33 years,  retiring to St. Helen, Michigan.

Leo died on 15 May 1988 and Selma died on 22 October 1995 and are buried in Roselawn Memorial Gardens Cemetery, Saginaw, Saginaw County, Michigan.

Orlaf Melvin Stenzel was born on 11 August 1916. He was baptized in 1916 and confirmed in 1930 at the Zion Lutheran Church, Iva, Richland Township, Saginaw County, Michigan. Orlaf worked for the W.P.A., which was a federal program that people carried out public work projects all across the country, they mostly worked on street and road projects.

Orlaf registered for the draft in Merrill, Saginaw County, Michigan on 16 October 1940 and was working for the neighbors. Orlaf enlisted in the Army on 3 April 1941 in Detroit, Michigan. It states in his military record under, civil occupation, that he was a semi-skilled chauffeurs and drivers, bus, taxi, truck, and tractor driver. He was a Private First Class in the U.S. Army during WWII and received a Purple Heart. Orlaf was was discharged from the Army on 5 June 1945. 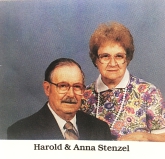 Harold WWII draft registration states he was working at Malleable Iron Works, General Motors in Saginaw, Michigan and he had a Merrill, Michigan mailing address but his dad's farm was in Richland Townhip.  Harold was a Carpenter.

Harold died on 17 January 2004 and Anna died on 29 March 2007 and are buried in Richland Township Cemetery, Hemlock, Saginaw County, Michigan.

Arnold Stenzel's WWII draft registration, dated 16 February 1942, states he is 20 years old living in Merrill and working for the Saginaw Furniture Shop.  He is still living with his parents in Richland Township with a Merrill mailing address. Arnold W. enlisted in the U.S. Army on 10 August 1942 and was discharged on 17 October 1945.

Hazen and Doris had two daughters, Judy and Debra Stenzel.

Hazen attended Hemlock High School in Hemlock, Michigan.   He enlisted in the Army on 2 January 1951 and was discharged on 2 October 1952 from the Korea War. He and his family lived on Graham Rd., St. Charles, Saginaw County, Michigan.