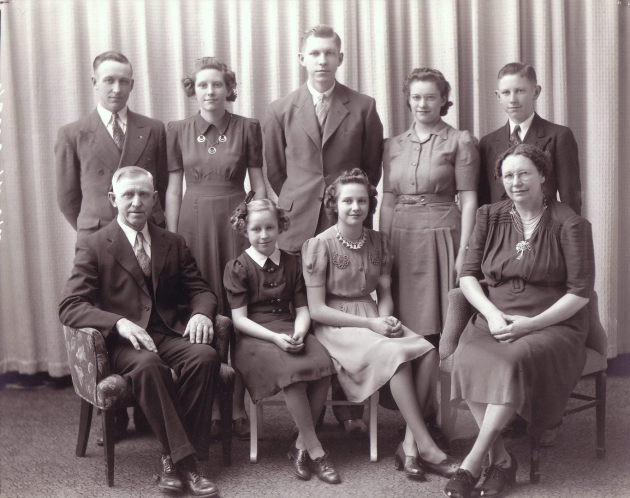 This is a picture of the William and Anna Stenzel Pretzer Family: Front Row - L to R: William, Loretta, Irene and Anna, Back Row - L to R: Delbert, Viola, Donald, Alice and Roland

William was engaged in farming all of his life and was a lifelong member of St. Peter's Evangelical church and served as an Elder from 1923 until 1950.  William and Anna  lived on the same farm during their entire 60 years of marriage.  William's  Centenniel farm was his father, Ferdinand Pretzer's farm. and after Williams's death it was willed to his son, Delbert Pretzer.

Anna died on 30 December 1976 and William died on 11 August 1974.  They are both buried in the Richland Lutheran Cemetery, Richland Township, Hemlock, Saginaw County, Michigan.

The photo is of William and Anna Stenzel Pretzer .

Clarence passed away on 13 August 1925 at the age of 10 years old due to a hemorrhage after a tonsilectomy.  Clarence is buried in the Richland Lutheran Cemetery, Hemlock, Saginaw County, Michigan.

Delbert was drafted into the U.S. Army in January 1942 and served in Puerto Rico with the Cost Artiliary, and later in the Military Police in Kansas. Delbert was discharged with the rank of Corporal.  Delbert operated the Pretzer Centennial Farm on Frost Road in Hemlock, Michigan.  The farm was first owned by his grandfather, Ferdinand Pretzer and is now comprised of about 140 acres.  The farm was willed to Delbert by his father.  Delbert was a lifelong member of St. Peter's Evangelical Lutheran Church, Richland Township, Hemlock, Saginaw, County, Michigan. He was also a member of the Hemlock - Merrill VFW Post #7302.

Delbert died on 10 July 2006 and Evelyn died on 19 May 2017,  They are buried in the Richland Lutheran Cemetery, Richland Township, Hemlock, Saginaw County, Michigan.

Donald was a WWII veteran of the Army Air Corps and was a part of the Airway Communication unit in the Persian Gulf.  He was a Sergeant and served in Cairo, Egypt.

Donald was the Cincinnati district sales manager for the H.J Heinz Compoany for 22 years.  He retired in November, 1894 after 33 years with thet Heinz Company.  Originally from Saginaw, Michigan, he worked for the Michigan Agriculture Department, the Dow Corning Company and the Saginaw News.

Alice died on 5 September 2002 at Bethlehem Lutheran Church in Saginaw, Michigan and Roy died on 3 February 2017.  They are buried at Chapel Hill, Freeland, Saginaw County, Michigan. 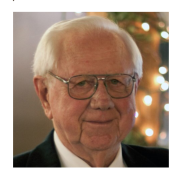 Roland was employed by the Wickes Corporation and the Pillsbury Companyin various management positions.  He retired in 1984.  Roland was a charter member of Summit of Peace Lutheran Church in Thornton and a member of the Gideon Association since 1985.  He was married to Miriam for 67 years.

Irene was a music school teacher.

Wally and Irene Bronner were owners and Wally was the  General Manager of Bronner's Christmas Wonderland in Frankenmuth, Michigan.  It is the largest display of Christmas decorations, open all year.  They were designers, producers, importers, exporters, and distributors of christmas prodcts.  Wally started out with a sign painting company and eventually started to make and sell commercial sized Christmas decorations.  The Christmas Store (Bronners Tannenbaum Shop and Bronner's Bavarian Corner) contributed to make Frankenmuth, Michigan a hot spot for visitors from near and far; along with the town Barvaria theme and famous chicken dinners.  As business increased, Bronner consolidated his businesses in 1977 on a 28-acre piece of land on the south side of town.  In 1991 a building addition brough Bronner's Christmas Wonderland to a space the size of five-football fields.  Wally was noted as a deeply religious man.

Viola was a school teacher.  Charles, Viola and their family lived in Harper Woods, a suburb of Detroit, Michigan. Viola was a teacher and Charles was in the United States Air Force. Viola was a proud and loving grandmother of ten grandchildren and two great grandchildren.

Viola died in October 2003 and her funeral was held at St. Thomas Lutheran Church in Eastpointe, Michigan. 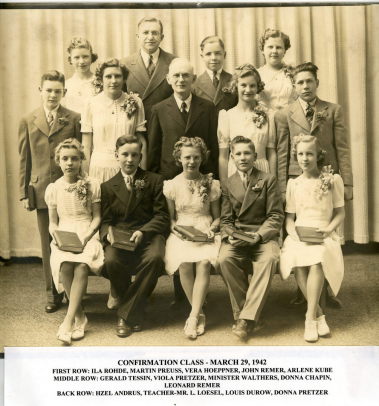 They had five children: Diane, Craig, Thomas, Paul and Sandra.

Loretta and her husband managed a Bonanza Steak House.