Minnie  was a member of the St. Peter Evangelical Lutheran Church, Hemlock, Michigan.  Her Confirmation Bible Verse was Psalm 50 verse 14.  Carl Dittman and Martha Kratz were the witnesses to the marriage of Minnie (Rohde) and Herman Koeppen.﻿

Minnie and Herman's children were:

The photo is of William and Mildred Koeppen on their wedding day.

The photo is of Edna (Koeppen) and Vernon Liebrock.

Edna and Vernon Liebrock had the following child:

The photo is of Meta Koeppen's confirmation picture.

Meta Koeppen married Roy Milledge and had the following child:  Roy Herman Milledge, he was born on 28 January 1932 and died 13 May 1998. 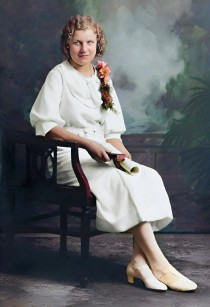 This is a photo of Hilda Minnie Koeppen's confirmation picture. Hilda and Jullius had the following children:

Julius Rahn was employed by the Dow Chemical Company for over 27 years.  He was also a member of the Zion Lutheran Church, Hemlock, Michigan.﻿

SOURCES:  researched by Brad and Jackie Rohde, information and photo's by William and Esther Rohde; Julius Rahn; and Lorraine Koeppen