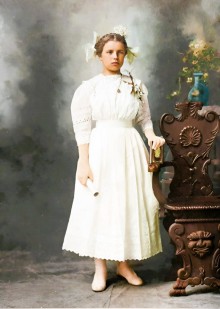 The photo is of Louise Rohde's confirmation picture.

Louise's sponsors for her baptism were Franz Fehn Jr. and his wife Maria, Mrs. Ferdinand Durow.  Louise was named after her Grandmother Louise (Gigham) Rohde, who was Karl Rohde's mother.   Louise was confirmed at St. Peter's Evangical Lutheran Church on March 16, 1913 and her Confirmation Bible Verse was John 14 V. 16.﻿ 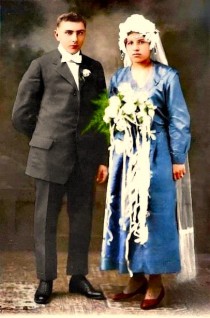 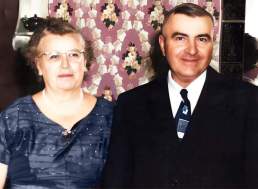 Lizzie and Charlie had the following children:

I have many fond memories of going to my Grandpa and Grandma Zabel's house - more so then my brothers and sisters as I was so far on behind them in age.  I still miss them to this day!  We always had FUN---the kind my grandchildren will never know!!  We would play in the barn with our cousins, shuck corn for the chickens and later on I could drive the tractor while Grandpa and my Dad used pitch forks and loaded it on the wagon!!  Grandma ALWAYS had candy for us or cookies!!  The best part was they would get together and play cards and tell stories---then we would ALWAYS have a lunch!  Grandma always had homemade bread, lunch meat, jello-you name it and she would pull it out of the refrigerator and of course I always got to sit next to her!  When I took drivers training those days you were taught on automatic's-well all my Dad owned were straight sticks-so when it was time for me to go and take my driving test to get my license grandpa let me take his car.  Pretty special!  They had an outhouse for years, and oil stoves in the dining room and living room.  Grandma crocheted and embroidered many beautiful things and always watch Gunsmoke every evening.  After Grandpa died I got to stay with Grandma for awhile, the school bus would pick me up at their home but best of all I got to sleep with her.  When I got married Grandma made me a quilt, I still have it after 35 years of marriage and I treasure it.  It will be passed on to my children.  These are just a few of my fondest memories, thanks for asking me!!   Elaine (Zabel) Edwards﻿ 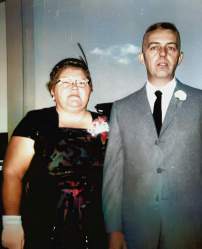 The photo is of Alvin and Ruth Zabel.

Alvin's sponsors for his baptism were Wilhelm Rohde, Wilhelm Koeppen, and Anna Rohde.﻿

Alvin and Ruth Zabel had the following children:

The photo is of Howard Zabel.

Howard's sponsors for his baptism were Julius Pretzer, Martha Hinske and Herbert Stenzel.  Howard served in the United States Army during WWII, he served in the T.E.C. 4 - Technical Seargent Grad 4 Calvary Reconisence Troop, he worked with the morse code.    He was a member of St. Peter's Evangelical Lutheran Church in Hemlock, Michigan.﻿

Howard married Myrtle Stevens and they had the following children:

Howard also married Dorleen Crosby and they had the following children:

The photo is of Norma Zabel.

Nora also married Patrick Miller and they had the following children: