The photo of Harry is part of a postcard photo that was sent to his cousin, Mary Buchholz of Michigan,  on August 1, 1913 from H.W. Buchholz, postmarked Bradford, Ohio.  The postcard writing was written on July 29, 1913 and states:  Dear Cousin - I thought I would send you this for fun.  I was in Columbus, Sunday night, then went to Sandusky on Monday morning and across to Cedar Point.  I did not go by myself.  We had a fine time.  How is everyone up there?  The rest down here is  ?

from H W Buchholz - be good. 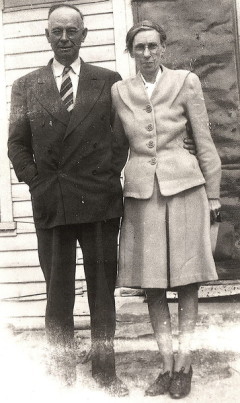 The photo is of Harry Buchholz and his wife, Virgie.

Harry worked as a bridge carpenter for Miami County, Ohio.  He was also, a member of the First Evangelical and Reform Church in Piqua, Ohio.﻿