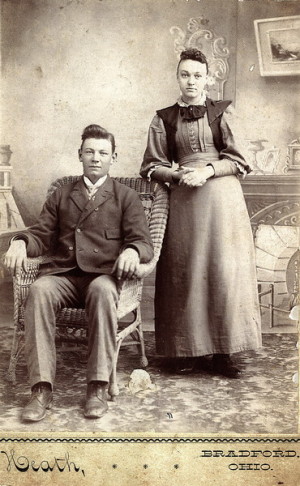 The photo is of Christian and his wife, Ida Buchholtz

Christian and his wife, Ida Belle, with their sons, Ray and Roy lived in Newberry Township, Miami County, Ohio.

Christian passed away in New York of appendicitis at the age of 25 years and nine months old. He was employed with the railroad.﻿

Oliver and Susan had the following children:

ROY BUCHOLTZ, BRADFORD, OHIO DIES OF TUBERCULOSIS -  Greenville, March 4, 1927 - Roy Bucholtz, 29, a well known young man of Bradford, Ohio died Wednesday afternoon at the home of his mother, Mrs. Newton Brookwalter, in that village, his death following a long illness from tubercular trouble.  He is survived by his mother and a brother.  Funeral services Saturday afternoon at 2 o'clock at the Bradford Brethren Church, Reverend Berkebile.  Burial in the Harris Creek Cemetery, Bradford, Ohio.﻿

Ray Buholtz Passed Away at the Home of His Mother, Mrs. Bookwalter at Bradford Wednesday

Ray Buholtz, aged 24, well known employe of the Penslvania railroad company, died at 3:30 o'clock Wednesday afternoon with tuberculosis at the home of his mother, Mrs. Bookwalter, in the neighboring village of Bradford.  He leave his other and one brother to mourn their great loss.

Funeral services will be held at 2 o'clock Saturday afternoon at the Bradford Brethren Church with Rev. Berkevile officiating.  Interment in the Harris Creek Cemetery.

Raymond and Bernice had the following children:

Mrs. Bucholtz was a member of the Bradford Church of the Brethren.

Survivors include: her husband, Raymond, three sons, Wilbur, Emerson and Paul, and one daughter, Deloris, all of Columbus, one brother, Guy Frolke, Bradford, a half-brother, Roy Frolke, New Bremen, four grandchildren and one great-grandchild.

Services will be held at the O.R. Woodyard Funeral Home, 255 East State Street, Columbus.  Monday at 1 p.m., with the Rev. Wilbur Fether officiating.  Burial will be in Harris Creek Cemetery, Bradford, Ohio.  Friends may call at the funeral home from 2 to 4 and 7 to 9 p.m. Saturday and Sunday.