Lewis was baptized, Johann Ludwig Buchholz, at the St. John's Lutheran Church, Covington, Ohio on February 19, 1888.  Also the church records states that his birthday was July 23, 1887.  Lewis's WWI draft registration that was signed by Lewis, states that he was born June 27, 1887. 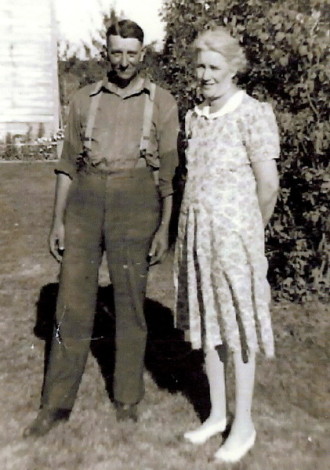 The photo is John and Fannie Bucholtz

Lewis and Fannie had the following children: 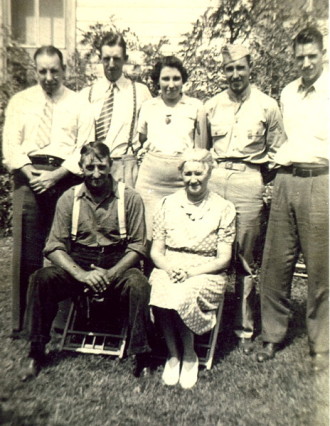 The photo is of the Lewis Bucholtz Family:  Left to Right - standing: J.D. Buchholtz, Lloyd Bucholtz, Florence Buchholtz, Bill Bucholtz and Glen Buchholtz; sitting Lewis and Fannie Bucholtz.  The photo was taken in the 1940's, Herbert Buchholtz was missing due to him serving in the service during WWII.

My Grandfather, Lewis John Bucholtz was always very nice to me and appreciated very much who I was and what I had done for him and my Grandmother, Fannie.  My grandparents came to our house often and shared a lot of meals with us.  I planted tobacco and tomatoes with my grandfather, he was left handed and I was right handed and it worked out fine on the planter.  My family always helped him with his crops and he with ours.  Butchering day was always a big day whether it was beef or hogs.  Grandpa trimmed out all of the hams and shoulders and helped us salt and sugar cure the pork to keep it and put it in our smoke house to smoke it.  My grandparents always had a large truck patch and Grandpa had muskmelons by the baskets - they sure were good!

My grandmother had many strokes late in her life.  My grandfather did everything for her (bathed, dressed, and fed her) along with all the house chores.  He would call me when he had to go to town for medicine and groceries and my children and I would visit with grandmother while he was gone.  They always came to my home to get flowers for memorials to put on the graves.  They lost a son Wilbur and during the depression and because money was tight at that time, the tombstone was taken back by the manufacturer.  This left only a slot of cement remaining on the gravesite for a long time.  I wanted my heirs to know where their great grandparents were buried, so I bought a tombstone with my grandparents and Wilburs name on it.  I still decorate the gravesites every year since I made a promise to my grandmother that I would always put flowers on them for Memorial Day.  I loved my grandparents very much and the work ethic that they instilled in me and others will always be a part of me.  They taught me so much.﻿ 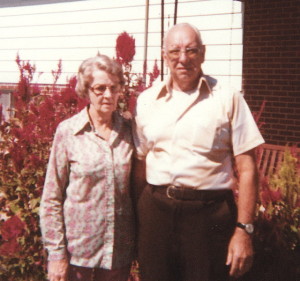 John and Janet had the following children: 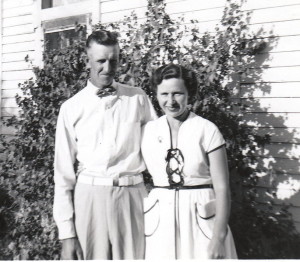 The photo is of Lewis and Dorothy Bucholtz and it was taken in 1953 on Jones Road in Laura, Ohio. 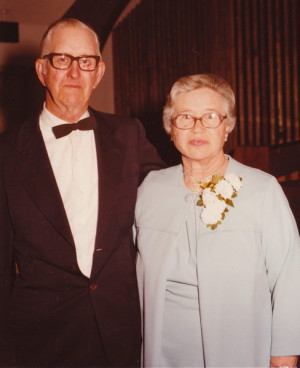 The photo is of Lewis and Dorothy Bucholtz and it was taken on 26 April 1980.

Lloyd and Dorothy had the following children:

Dorothy graduated from high school in 1933 from Tippecanoe High School in Tipp City.  Dorothy was employed by the former Troy Sunshade Company and Murphy's 5 & 10 Store in Troy, Ohio.  She also worked along side her husband Lloyd on the family farm.  Dorothy enjoyed the farm life, vegetable and flower gardening.﻿

3.  Florence May Buchholtz was born 3 April 1912 in Circle Hill, Miami County, Ohio.  She died 31 May 1992 in Villa Convalescent Center, Troy, Ohio and was buried in Miami Memorial Park, Covington, Ohio.

Florence and Harold had the following children:

Wilber passed away due to emphysemia from asthma, at the age of 3 years and 3 months old.﻿ 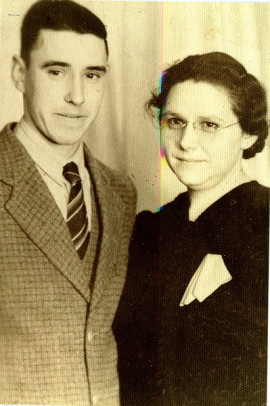 The photo is of Bill and Pearl Bucholz.

Bill and Pearl had the following children:

***newspaper article - The Piqua Daily Call -  Thursday, July 19, 1945 - Page 10
LAUDED BY GENERAL - Recently promoted to a Corporal, William Bucholtz, son of Mr. and Mrs. L.J. Bucholtz, Route 2, Bradford, Ohio has received a letter of honor from Commanding General W.H. Simpson, after serving as Palace Guards for the General and Staff for a period of time after V-E Day.  A member of the 15th Cavalry RCN, Squadron., in Germany, he is temporarily stationed with the Seventh Army.  Entering service in January 1942, he sailed for overseas the first of March 1944.  He now wears four battle stars. Following is General Simpson's letter:
Dear Private Bucholtz:  Upon the termination of your service as my security detachment I wish to express my best personal wishes to you and the other members of your troop for the excellence with which you performed your duties.  Coming to me in Maastricht, Holland, and maintaining your good work during the Nineth Army's operations from there to the Roer River, and from the Roer to and beyond the Rhine River, your service has not passed unnoticed by any means.  Your duties while passive in nature, were successfully performed, as evidence by the complete absence of any local or internal troubles during the time you were with us.  For the exceptional performance of these guard duties. I am personally thankful to you.  Yours truly,  W.H. Simpson - Lt. General, U.S. Army Commanding

COVINGTON - With arrival of the energy crunch and frigid temperature this winter, more and more people are giving thought to heating their homes with wood.  That idea is nothing new to Bill and Mae Bucholtz, who have used wood to heat their farm house on Falknor Road for nearly 30 years.  When the couple moved to the farm in 1947, they heated with coal.  Bucholtz saw an advertisement for a woodburner, considered the 30 acres of woodland behind the house, and they made the switch. Bucholtz claims there is a difference in heat generated by burning wood.  "It penetrates," he contends.  He says he is not comfortable with fuel oil heat.  Bucholtz points out there is a difference in varieties of wood.  Hard woods, such as oak, hickory, thorn and elm, burn longer.  He says it takes about one-fourth more wood if soft woods like mulberry and maple are used.  Bucholtz, born in 1917, says this is the roughest winter he has seen, and they've burned more wood than usual.  Like many others, Mr. and Mrs. Bucholtz did not anticipate the long spell of cold whether experienced this year,  and are hoping their fuel supply lasts.﻿ 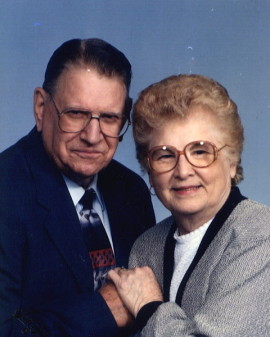 The photo is of Glen and Lucille Bucholtz

He had the following child: 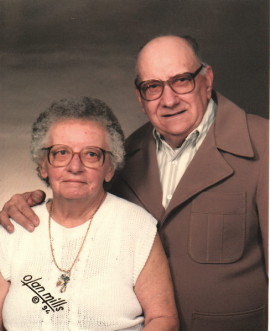 The photo is of Herbert and Maribelle Buchholtz

Herbert and Maribelle had the following children:

Herbert served in the United States Army during WWII.  Herbert and Maribelle lived on Buckneck Road, Bradford, Ohio from time of their marriage until 1958.  The family moved to North Street, Rt. 721, Bradford, Ohio and lived there until 1963.  Herbert worked for Ernest Warner.  They then moved to Circle Hill to the potato farm and Herbert worked for Russell Warner until 1979.  Later, Herbert worked for Pebbletons Sand and Gravel until he retired in 1987.    In 1976, Herbert and Maribelle bought a home in Gettysburg, Ohio where they resided the rest of their lives.﻿