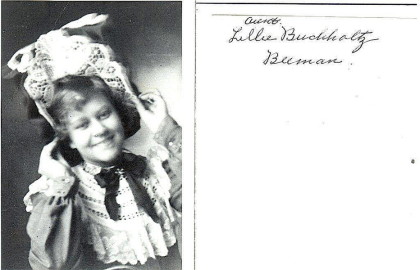 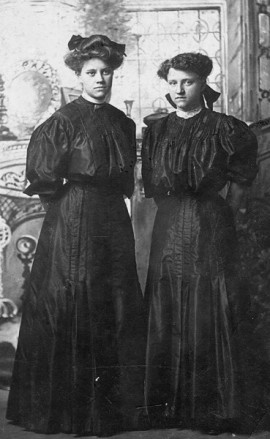 The photo is of Lillie May Buchholtz (left) and her sister, Bertha Buchholtz (right)

Lewis attended the Covington, Ohio schools and was a brakeman and boiler fireman for the Pennsylvania Railroad.  He was a member of the Covington Church of the Brethren, Masons Lodge of Pleasant Hill, Ohio; Royal Arch Masons of Covington, Ohio; and Mason Commandry of Troy, Ohio.﻿

Lillie and Lewis had the following children:

Lillie's cause of death was pneumonia contributed from tuberculosis, she was 36 years and 28 years old.  Lillie, Lewis and their children lived at 320 N. Pearl St., in Covington, Ohio.﻿

Mrs. Beeman joined the Church of the Brethren March 25, 1913 and has been a woman of fine Christian character and greatly devoted to the church she loved.  By her noble life and genial attitude she has won a large circle of friends who mourn her departure.  Mrs. Beeman was a good true wife, an ideal mother and a home maker in the best sense of that term.  Though she had a long seige of affliction she was patient, brave and uncomplainable through it all.  Though she has passed from us, her influence will linger as an inspiration and a benediction to her loved ones whose interest were always first in the thoughtful service.  In her passing the family loses one the value of whose life no words can describe.  In this loss these loved ones have the sympathy of friends, neighbors, the church and entire community.  The family wish to express their deeply felt thanks to their friends and neighbors who have done so much for them in all the months of anxiety and in these latter days of bereavement.﻿

In her heroic fight for life and health Mrs. Lillian Bucholtz Beeman, wife of Louis Beeman, had the strong sympathy of all her friends and neighbors, the five little ones, ranging in age from three to fourteen years of age, her husband, her parents and sisters making enough of an incentive for any good women to wish to live and help care for her love ones.  But the fight was a ? one, and the frail body, worn by ? of a long disease peacefully slept at the call of the Master in the early hours of Sunday morning.

Funeral services was held at the Church of the Brethren Tuesday at 2 p.m., with Rev. C. F. McKee officiating.  Burial in High Cemetery, George W. Miller, undertaker in charge.

Harold and Lee had the following children:

After graduating from high school, Harold enlisted in the U.S. Army Infantry on October 15, 1940, during WWII.   He was elevated to the rank of Staff Sergeant.   He was affiliated with the Ohio National Guard and was a member of the Northridge American Legion Post and active in the National Rifle Association.  He worked as a Plant Guard either at the Frigidaire Plant in Dayton, Ohio or Delco Auto Parts in Dayton, Ohio.﻿ 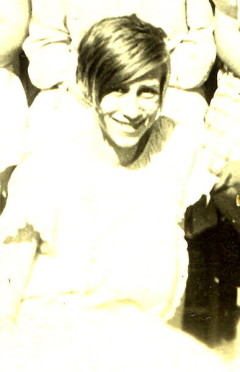 RUBY MAY BEEMAN - Ruby May Beeman, daughter of Louis and Lillie M. Beeman was born, August 15, 1914 and passed to her "Home Over There", Wednesday, December 3, 1930, aged sixteen years, 3 months and 18 days.  Very early in her life she united with the Church of the Brethren at Covington, Ohio.  She has continued a faithful member of the church she so much loved.  She is survived by her father, Louis Beeman and the following sister and brothers:  Ila Beeman, Harold Beeman, Eugene Beeman, Donald Beeman, all of West Milton, Ohio.

Ruby's mother preceded her in death February 8, 1925.  She is also survived by her grandparents, John and Anna Bucholtz of Covington, Ohio.  Besides her uncles, aunts and cousins she leaves a host of friends who mourn her early departure from our midst.  All her life except the last year has been spent in Covington, Ohio.  For the last year she has lived in West Milton, Ohio.

Ruby was a girl of fine christian character and attractive personality.  By her fine life and genial attitude she had won a large number of friends in the community of which herself and family were a part.  Though a sufferer for a number of recent months, she bore it with courage and without complaint.  The same genial optomistic spirit characterized her life unto the very end.  The entire community join in their expression of the high esteem in which she was held and also in their sympathy for the family in these days of their loss and sorrow.  Ruby passed away from Pulmonary T.B.﻿ 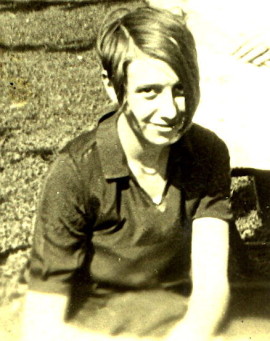 The photo is of Ila Marie Beeman.

3.  Ila Marie Beeman was born in 1912.  Ila married William Young.  They had the following children:

Mrs. LEWIS BEEMAN - TROY, OHIO - Marriage vows were taken by Barbara Jeanne Worley daughter of Mr. and Mrs. Marvel W. Worley, 718 West Market Street, and Lewis Eugene Beeman, son of Mr. and Mrs. L.H. Beeman, R. R. 1, Laura, Ohio at 3:30 p.m., October 26, in the parsonage of First Methodist church.  Rev. Robert D. Annand officiated.  The bride, wearing a winter white suit with black accessories and a corsage of Talisman roses, was given in marriage by her father.  She was attended by her sister, Miss Marjorie Worley, maid of honor, who wore a grey suit with black accessories and a yellow rose corsage.  Mr. Beeman was attended by George Furnas of Covington, Ohio as best man.  A reception was held in the Worley home with members of the immediate families attended.﻿

Lewis "Gene"  and Barbara had the following children:

Gene served in WWII and was stationed in the South Pacific at New Guinea.  He was a 5th grad Tec. Medical Core.  He received the Asiatic - Pacific Campaign Ribbon, a good Conduct Ribbon, and an American Defenses Service Ribbon.  He resumed his life when leaving the military and became a sheet metal worker. and also drove truck for Miami Metal Finishers.

Donald and Dorothy had the following children: