Carl and Elva had the following children: 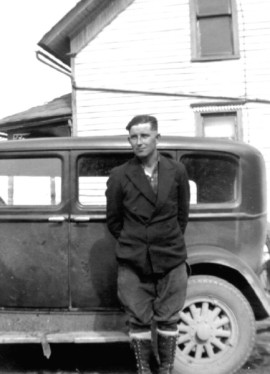 Carl loved the outdoors, loved to fish and he kept Beagles and Bassette hounddogs for hunting.  Carl was very athletic and loved all sports but his favorite was baseball.  He was excellent at baseball and was an exceptional baseball pitcher who through a great curve ball.  During the depression he worked for the Civilian Conservation Corporation, (CCC) government sponsored and sent the money he earned home to help his family.  Carl was a very generous man who trusted everyone.  In 1940 he bought his own 80 acre farm in Oakley, Michigan but sold it a few years later and then lived with father, mother and brother Earl.  In 1946, Carl went to work at Malleable Iron in Saginaw, Michigan, he was a skilled tradesman (Machine Repair).   He loved the woods and usually always lived by or near the woods.   Carl could also play the accordian, concertina, and piano. 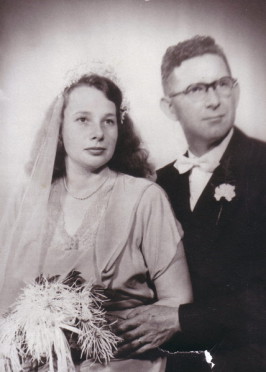 The photo is Carl and Elva's wedding picture. 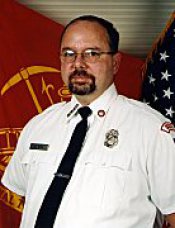 5.  Curtis Bucholz was born 6 October 1961 in Saginaw, Saginaw County,Michigan.  He died Saturday evening, May 27, 2017 at St. Mary's Hospital, Saginaw, Michigan.  Curt was a 1980 graduate of Reese High School, Reese, Michigan. He later attended classes at both Delta and Kirtland Colleges.  On June 7, 1986 he married the former Tammy Schwartz in Reese, Michigan.  He was formerly employed by Dixie Cut Stone, Bridgeport, Michigan as a Safety Coordinator and later at Dow Chemical Company in Midland, Michigan for several years.  He was a member of Calvary Chapel Fellowship in Vassar, Michigan and served his community as a firefighter in Reese, Michigan for several years.  Curt's enjoyments included fishing, hunting, camping with his family and most importantly was being with his grandchildren.

Curt and Tammy's children are: 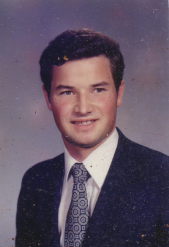 Bucholz, Mark Claire  9/14/1962 - 5/1/2022, 59, of Niles, Michigan, passed away suddenly, of natural causes on May 1, 2022 at Memorial Hospital in South Bend, Indiana.  He was born on September 14, 1962 in Saginaw, Michigan to the late Carl and Elva (Deal) Bucholz of Chesaning, Michigan.  Mark graduated from Bridgeport Baptist Academy in 1981.  In 1893, Mark enlisted in the U.S. Marine Corps and served his country proudly until 1989, when he received his honorable discharge.  On May 21, 1888 Mark married the love of his life, Heidi A Bartholomew at a ceremony in Saginaw, Michigan.  The couple grew up as friends, graduated together, raised a family and were best friends.  He was  currently employed with AT & T where he has worked as a telecommunications specialist since 1994 after relocating to Niles, Michigan.  Mark was an American patriot and lived the values of God, Family and Country.  He was a member of the American Legion Post 51 in Buchanan, Michigan.  He also enjoyed Harry Potter, the Hunger Games, war movies and the History Channel.  Mark will also be remembered for his outgoing personality and goofy sense of humor.  He also enjoyed family trips up north and Frankenmuth, Michigan.  Mark was preceded in death by his parents, Carl and Elva Bucholz,  as well as his foster parents (Pops and Jiuanita Mayo). Also, he was preceded in death by his brother, Curt Bucholz.  He is survived by his wife, Heidi Bucholz of Niles, Michigan; his children, Laura Bucholz (Matthew Allain) of Elkhart, Indiana, Kenny and Megan Bucholz of Niles, Michigan; siblings, Gennette (Paul) Noble, Joann (Clarence) Lamblin of Saginaw Michigan; Charlie (Shelley) Bucholz of Reese, Michigan; Janice (Mark) Wilson of Tampa, Florida; Toni (Todd) Lewicki of DeWitt, Michigan as well as a host of nieces, nephews, foster family and friends.  A times of visitation will be held on Sunday, May 8, 2022 from 4:00 p.m. until 6:00 p.m. at Brown Funeral Home in Niles, Michigan. Funeral Home with committal services and Full Military Honors to be rendered at Silverbrook Cemetery, Niles, Michigan.  Mark will always be remembered for his patriotism, his kindness to others and is love for his family.

Mark and Heidi's children are: