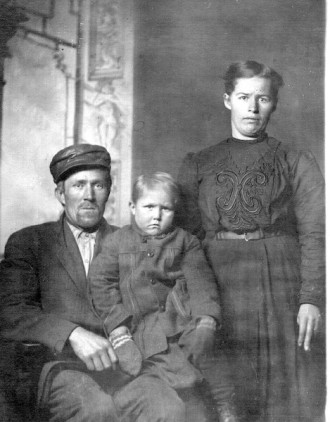 The photo is of Calvin, Abbie and Arnold Harris

Abbie and Calvin had the following children:

Calvin and Abigail purchased a forty acre tract of land in Lakefield Township, Saginaw County.  At that time, shortly after 1909, it was still a wilderness.  They cleared enough land to set a house moved from Lafayette Township.  The house was originally part of John E. Harris's home.  About a year later, they built a small barn.  Calvin farmed summers and for several years, went through the country with a buzz saw and a one-cylinder gasoline engine mounted on a wagon and buzzed stove wood for hire. In later years (around 1927), he purchased a used Model T Ford dump truck (one of the first to come into Lakefield Township) with which he hauled gravel for road building.  Calvin had asthma for many years and died February 27, 1941.  According to the Robert Rigg Family Reunion Book, Calvin Harris died on February 17th at the age of 59 years and 8 months old. 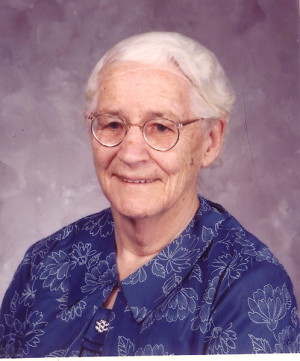 Abigail had lived in Merrill, Michigan for about 65 years while married to Calvin Harris and raising two of her three sons; her second son died at the age of 3 years old.  After Calvin passed away in 1941, Abigail married Clay Shaw, also a widower, in 1953.  Abigail and Clay Shaw built a home at Clear Lake, North of West Branch, Michigan.  There she lived 25 years before her death at the age of 90 years.﻿ 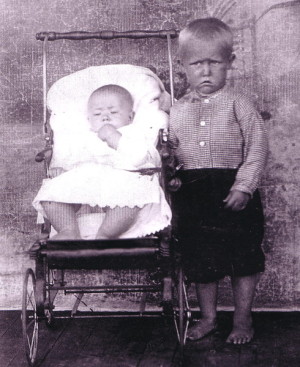 The photo is of Leonard in the buggy with his big brother, Arnold beside him.  Leonard died at the age of 18 months old. 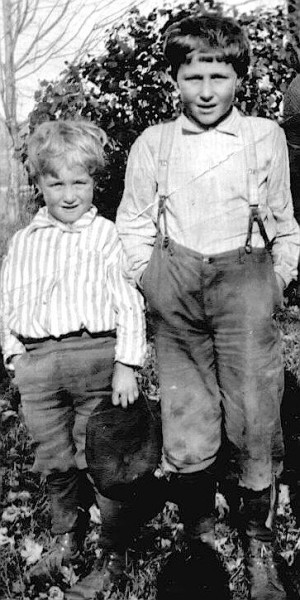 The photo is of Arnold Sydney Harris (right) with his brother John Lester Harris (left). 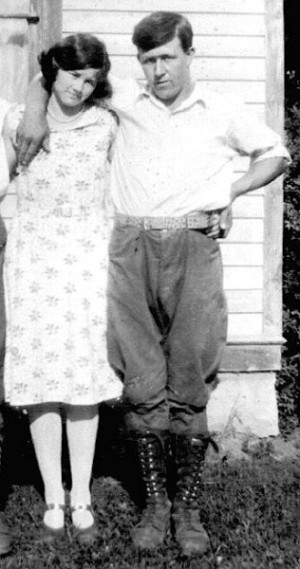 The photo is of Arnold and Ruth Harris

Arnold and Ruth had the following children:

Arnold Sydney Harris, the oldest son of Calvin and Abigail Harris, attended school through the eighth grade.  He trapped during the winter months  after getting out of school, purchasing a forty-acre farm of wildland and fencing it from the proceeds of one season's trapping.  It was the S.W. 1/4 of S.W. 1/4 of Section 24 T 11 N R 1 E, Lakefield Twp., Saginaw County, Michigan.  Sometime in the late 1920's he proceeded to build a sawmill.  At first it was a bolter mill to saw lumber from small short logs that the average mill would not saw.  He first powered it with a 15 hp. International Tital one cylinder engine mounted on steel trucks.  Then in 1930 after his brother Lester graduated, he increased the size of the mill to take standard size logs, and Lester purchased a one cylinder 25 hp. Fairbanks Morse semi-diesel engine and they went into business together, moving from job to job with the mill, where, they could gather together twenty thousand board feet of sawlogs. Arnold was a self-taught mechanic and he operated sawmills for over 40 years.  The sawmills were usually built by Arnold.  Arnold, also built Scrag Mills and Gang Saws for others.  There are several in Michigan. He was a member of the First United Methodist Church. 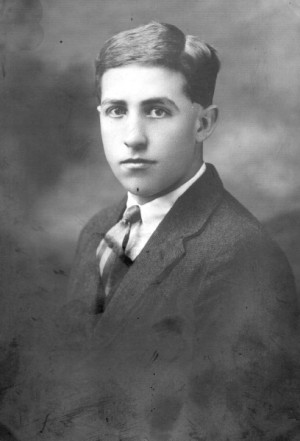 Lester and Myrtle had the following children:

Lester Harris played the banjo, accordian, and violin.  In his teens he would play for house parties and dance halls.  Lester finished school and purchased a 25 H.P. Fairbanks Morse Semi Diesel Engine and went into business with his brother, Arnold Harris. The brothers ran a portable sawmill for about 10 years, known as, Harris Brothers. Arnold and Lester moved from place to place, wherever there were enough logs gathered together to total 20,000 board feet.  Arnold and Lester dissolved the partnership in 1941 and Lester ran a sawmill on his own until October of 1947.  Lester sold the mill and moved to Harrison, Michigan.  He built and ran the Long Lake Cabinet Shop for 25 years. 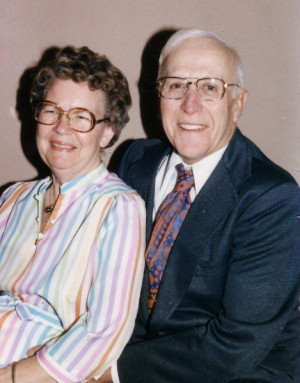 The photo is of John (Lester) and Myrtle Harris