Verne and Mary had the following children:

3.  Margaret K. Lundy was born 1911.  Margaret lived in Washington D.C. where she worked for the Internal Revenue Service.

Verne and Mary are in the 1905 census - Clarion, Iowa, also, a May H. and John Lundy.  According to Verne Edward Lundy's WWI Draft Registration, his occupation was a carpenter and a builder.  He lived in Clarion, Wright County, Iowa and his wife's name was Mary.  Verne was 43 years of age and his birthday was October 2, 1875.  The WWI registration # was 674 and the order # was 1863.

VERNE LUNDY, 73, DIES MONDAY AT CEDAR RAPIDS HOME   -   Verne Lundy, 73, died Monday at a nursing home at Cedar Rapids.  Funeral services will be held Thursday at 9 a.m. at St. John's Catholic church at Clarion.  He has been a Clarion resident over 50 years and the past year he has been at the Cedar Rapids Nursing Home due to ill health.
He is survived by three sons, Edward of Detroit, Michigan; John of Austin, Minnesota; and James of Benning, New Mexico; two daughters - Mrs. Margaret Walker of Washington, D.C. and Mrs. Frank Dunn of Cedar Rapids: one sister and three brothers.  He was a former carpenter and a mason.  The Eyler funeral home was in charge of arrangements.﻿ 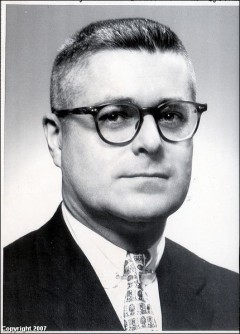 Edward entered the Army Air Force as a private in 1943 and had attained the rank of Major two years later.  After WWII he joined the Ford Motor Company and worked for Henry Ford II.  Henry Ford II hired ten men that worked together while in the Army Air Force at the office of Statistical Control during WWII.   The group of ten, soon to be known as "The Whiz Kids", were:  Charles B. "Tex" Thornton, J. Edward Lundy, Wilbur Anderson, Charles Bosworth, Robert McNamara, Arjay Miller, Ben Mills, George Moore, Jack Reith and James Wright. Not only did the "Whiz Kids"  help the Ford Motor Company become successful, they became one of the most celebrated success stories in American Business.  "J. Edward's accomplishments in automotive finance are legendary.  He defined finance as an important information source and management tool,  a departure from the traditional orientation toward only accounting, treasury and auditing.  He believed the finance function was at the heart of "management with facts." He also focused the finance function on forecasting, making information useful and actionable by senior management and was able to make recommendations to remedy a wide variety of issues.   "To this day, some in Ford Motor Company's Finance Staff use the term Lundyism to refer to grammatical, typographical, and formatting conventions in the preparation of financial reports."

Edward retired from Ford Motor Company in 1979 as Executive Vice President and Chief Financial Office and continued to serve on the Company's Board of Directors until 1985.  He served as Director of Research and Analysis for the Statistical Control Headquarters of the Air Force in Washington.  He also was a member of the Board of Mt. Mercy College, Cedar Rapids, and the Advisory Board of the Wharton School of Finance and Associate Trustee of the University of Pennsylvania, and served on the Advisory Council of Princeton University.  The J. Edward Lundy Pavilion at Mercy Medical Center, Cedar Rapids, Iowa; has been named after him.   A campus building, Lundy Commons, at the Mount Mercy College, Cedar Rapids, Iowa has been named after him.  Edward has also been a Director of the American Road Insurance Company, Ford Motor Credit Company, and Ford Lease Development Company.

James T. Lundy, a longtime resident and civic leader of Deming, passed away Saturday, Oct. 27, 2001 at his home. He was born Dec. 16, 1916, to Vern E. and Mary Lou Lundy in Clarion, Iowa. Visitation will be Tuesday from 3-5 p.m. at Baca's Funeral Chapels in Deming. The prayer vigil and rosary service will be held Tuesday at 7 p.m. at Holy Family Catholic Church. Mass of the resurrection will be celebrated Wednesday at 10 a.m. at Holy Family Catholic Church, with Fathers David Bentley, Dan Barfield, Richard Catanach and Joe Anderson as celebrants. Burial with full military honors will follow at Mountain View Cemetery. After attending the University of Iowa, Mr. Lundy volunteered to serve his country. He trained as a cadet in Victorville, Calif., where he received his bombardier wings in 1941. During World War II, he was stationed in England, where he served with the 8th Air Force. He completed 25 missions over Germany. Among other medals, he was awarded the Distinguished Flying Cross for extraordinary achievement and valor in the European Theater of War. He served at Deming Army Air Field as a bombardier flight leader and cadet instructor. There he met and married his wife of 55 years, Celia. Mr. Lundy was an active business and civic leader in Deming before he retired in 1977 as part owner/manager of Mahoney's Hardware Store. He served two separate terms on the Deming City Council; was a charter member of St. Joseph Council 4256, serving as council treasurer for 25 years and as a fourth degree knight with Assembly No. 1731; was a member and past president of the Old Timers Association; and was a member and past president of the Rotary Club. Mr. Lundy was a member of Holy Family Church and served on the first parish council, established in 1949. In 1977, he was appointed by Gov. Jerry Apodaca to serve a two-year term on the International Space Hall of Fame Commission in Alamogordo.