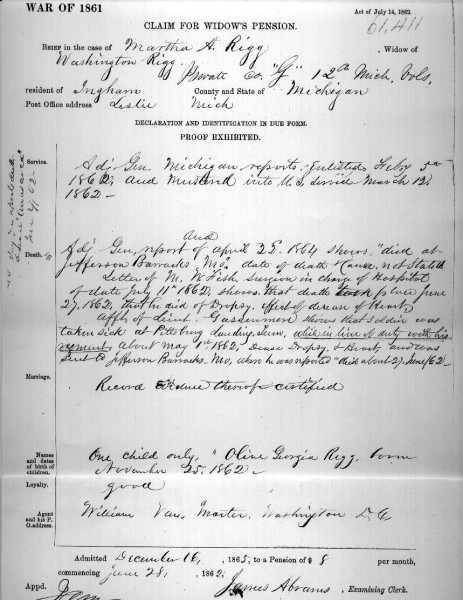 George Washington moved to Alaiedon Township, Ingham County, Michigan with his family sometime after 1848.  He registered to vote in Alaiedon Township on March 31, 1860 as a Republican.  George Washington Rigg resided in Onondaga,Ingham County, Michigan with his wife, Martha, before he enlisted as a Private in the Company G Twelfth Infantry on February 5, 1862 at Alaiedon, for three years.  On the 15th of March 1862, he mustered into the infantry.  George's regiment was raised mostly in the southwestern counties, and very largely in Berrien County.  There were considerable numbers from Jackson, Ingham, and Eaton Counties, the latter two being in Company G.   The rendezvous was at Niles, in Berrien County, from which point the command left for St. Louis, Missouri, on the 18th of March, 1862 with 1000 names on its rolls.  Company G was engaged in the battle of Pittsburg Landing from 3 a.m. April 6th until 4 p.m. April 7th.  The company was stationed at Bolivar, Tennessee, July-August 1862.  George Washington Rigg died June 27, 1862 in St. Louis,  Missouri.  He is buried in National Cemetery at Jefferson Barracks, Missouri in Section 53, Grave No. 939.  George Washington Rigg, an American Hero, died at the age of 27 years old, leaving a young widow, Martha,  and an unborn child, Olive Georgia Rigg.

George and Martha had the following children:

PROBATE PAPERS;   Olive Rigg was the daughter of George Washington Rigg and Martha J.Hopkins Rigg. Olive was orphaned by father, Washington who died in the Civil War, according to a Ingham probate record #736, it states as follows:  "Petition for affadavit, dated 4 Nov 1865. of guardianship.  Martha J. Riggs, 19, (aunt) and Hiram Riggs, 17, (uncle) both of Meridian, both parents dead, ask that John W. Every of Alaiedon be appointed guardian to Olive Rigg." Another probate record #743 states the following:  Olive Riggs, minor child of Washington Riggs,  F.P. Moody guardianship granted 10 Aug. 1866; discharged 15 March 1870.

Information from the Military National Archives, Ingham County Probate, State of Michigan Library Archives, The History of Robert Rigg and Family from 1800, and researched by Jacqueline Rohde.