Austin and Maria had the following children: 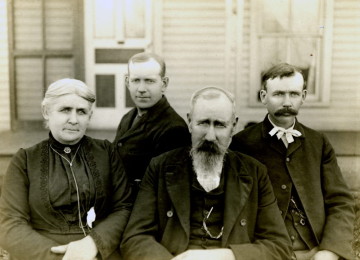 The photo is of Austin with his second wife Abbie, and sons, Rob (left) and Charles (right) Riggs.  The photo was taken before Austin's death in 1909.

The following is information and documentation about Austin Rigg/Riggs

*****A, 1859 Alaiedon platmap shows that Robert Rigg lived on an  80 acre parcel of land on the corners of Holt and Every Roads.  Austin lived on a 40 acre parcel of land, just north of Robert on Every Road.  Then, brother Leslie, lived on the next 40 acres of land on Every Road north of Austin.   Austin purchased a 40 acre parcel of land on Every Road in Section 13 on May 27, 1861 from his father, Robert Rigg. The same day, Austin's father, Robert Rigg, sold another 80 acres of his 160 acres to J. Hammel (the 80 acres were on the corner of Every and Holt Roads).  These two transactions left Robert Rigg with a 40 acre of parcel of land.    On April 3, 1866 Austin purchased land of Robert Rigg at public auction, which was ordered by the Judge of the Probate Court of Ingham County, Michigan on December 5, 1865 to sell for the minor children Hiram and Martha Riggs.  This information shows that something had happened to Robert Rigg. The time frame December 1865 is three years after Robert and Margaret's sons, Washington, Thornton and Meredith Rigg died in the Civil War.   Although, according to the school records of the German School, Robert Rigg was the Director of the German School from 1861 through 1863.    Also, this 40 acres purchased by Austin at the Public Auction and the 40 acres that was Austin's on Every Road was the 80 acres of property that Charles Riggs, son of Austin, lived on later.

*****Austin also purchased 40 acres on Holt Road in Section 23 from his brother, Hiram Riggs and his wife, Nancy, which they purchased from Louisa Porter on October 18, 1870.   Hiram sold Austin the 40 acres on October 5, 1872.  Also, on September 13, 1873 Leslie Rigg purchased 40 acres from Adrian Watkins, the land was located directly east of Austin's on Holt Road but Leslie sold this property to William Brenner on June 8, 1880.  At that time Leslie purchased an 80 acre farm in Gratiot County, Michigan  (copy of Deeds).  In 1888, Austin purchased an additional 80 acres next to the property that was Hiram's, making the tract of land owned by him,  120 acres.  In, 1907 Austin's son, Robert, purchased an additional 40 acres, making the property 160 acres in all.

*****Austin once again purchased land from his brother Hiram.

*****Austin's military file states that Austin Riggs was 5 feet 10 inches, his complexion was light, his eyes were light (blue), and his hair was light. Austin enrolled at Jackson, Michigan, on the 25th day of August 1864 as a private, in Company G 12th Regiment, Michigan Infantry and was honorably discharged at Camden, Arkansas September 9, 1865. On a document titled "DECLARATION FOR WIDOW'S PENSION", signed by Abbie Riggs as the widow of Austin, she states "The soldiers right name was Rigg, but he always used Riggs as his name.

*****Austin's obituary...
Austin Riggs, the fourth child of Robert and Margaret Rigg and the last surviving member of a family of nine children, was born in Bellroy, Carroll County, Ohio, January 26, 1833.  He died at his home in Alaiedon, Michigan after a protracted illness, March 3, 1909, at the age 76 years, one month and five days.
On March 20, 1858, he was married to Maria Dewey of Deerfield, Lenawee County, Mi.  To them were born seven children, only two of whom survive him, Robert and Charles, both of Alaiedon.
On August 25, 1864, he enlisted in Company G, 12th regiment of Mason, for 1 year.  He was 31 years old and the fourth of his family to serve his country in the Civil War, his three brothers all having died in the war at the time of his enlistment. He remained in the service until the close of the war, being stationed at Little Rock, Arkansas, the greater part of the time. He was discharged at the expiration of term of service at Camden, Arkansas, September 9, 1865.
November 13, 1896, he was married again to Abbie Riggs of Gratiot County, Michigan.
Austin was one of the pioneers of Ingham County having, with the exception of five years, residence in Mason, resided in Alaiedon nearly sixty years.  He came here when the country was new and by his own energy cleared his 200 acres of land and built his home.  Of a retiring disposition he was best known by his own family and was a devoted friend and father.  At the time of his death he was a member of the G.A.R. post, and also a member of the F. & A.M., Lodge No. 70, both of Mason.
Funeral services, conducted by Rev. Gorsline of Williamston, were held at the DuBois school house,  with interment in DuBois Cemetery.
Austin Riggs' cause of death was due to a kidney inflamation - nephritis - Brights Disease.

1st. I give, devise and bequeath to my wife, Abbie Riggs, the general use and control of the following described lands: The northeast quarter of the northwest quarter of Section number twenty-four, in township number three (3) north of range number one (1) west, State of Michigan; also that certain piece or parcel of land situate and being in the City of Mason, Ingham County, State of Michigan, and described as follows: to-wit: Commencing at the intersection of the east line of Okemos Street, and the north line of Shafer Street, on the northeast quarter of the southwest quarter of section four.  But, the said Abbie Riggs, my said wife, shall in no case have the right to sell, mortgage or convey the above described lands, and at her death the said lands shall descend to my sons, Robert S. (C) Riggs and Charles E. Riggs, share and share alike to them, their heirs, executors, administrators and assigns, and to them and their benefit use and behoof forever.

2nd. I give, devise and bequeath to my son, Robert C. Riggs, the general use and control of the following described lands: - the east half of the northwest quarter of section number twenty-three in Town three north of range one west, Ingham County Michigan, and all the profits, income and advantage that may result from the same for and during the term of his natural life, but the said Robert C. Riggs, my said son, shall in no case have the right to sell, mortgage or convey the above described lands, and at Robert C. Riggs' death the said lands shall go to the heirs of his body, but if he leave no heirs, then the same shall descend to his brother, Charels E. Riggs to him, his executors, administrators and assigns, and to his and their use and benefit favor.  (The land was on Holt Road between Every Road and Walline Road in Alaiedon Township).

3rd. I give and bequeath to my son, Charles E. Riggs the general use and control of the following described lands:  The north half of the southwest quarter of section number thirteen, in town three north of range one west, in Ingham county, State of Michigan, and all the profits, income and advantage that may result therefrom, for during the term of his natural life,  but the said Charles E. Riggs, my said son, shall in no case have the right to sell, mortgage or convey the above described lands, but at his the said Charles E. Riggs' death the said lands shall go to the heirs of his body, but if he leaves no heirs, then the same shall descend to his brother, Robert C. Riggs, to him, his heirs executors, administrators and assigns, and to his and their use and benefit forever. (The land is on Every Road north of Holt Road in Alaiedon Township - the original property of Robert and Margaret Rigg when coming from Ohio in 1848)

4th. All the rest and residue of my estate, real, personal and mixed, of which I shall die seized and possessed, or to which I shall be entitled at my decease, I give, devise and bequeath to be equally/divided between and among my said sons, Robert C. Riggs and Charles E. Riggs, but should one of them die without issue before my decease, then to the surivor alone.

*****This is a news article that was published on Wednesday, February 14, 1979 but I found it to be appropriate to put the article under Austin Rigg's information.

RIGGS FARM IS A CENTURY-PLUS OLD --  A bit of Mason history was acknowledged in December, 1978, when the Riggs farm, 1297 Holt Road, Mason, was designated a Centennial Farm by the Michigan Historical Division of the Secretary of State's office.  The farm, 160 acres of it, is owned by Margaret Riggs Dieter, Lyle, Helen and Robert Riggs, and has been in their family since 1870.  That was when their great uncle, Hiram Riggs, purchased the original 40 acres in Alaiedon Township on October 18.  Two years later, Hiram sold the farm to his brother, Austin, on October 5, 1872.  Great-grandfather Austin added 80 acres to the property in 1888 and his son, Robert, purchased the 40 acres in 1907.
The father of the present Riggs', George, was born an only child in 1896.  He married Cora Eifert in 1914.  The present owners were born at four year intervals, Margaret, the oldest at 62, is the wife of Harold Dieter of New York.  Lyle, now 58, is assistant vice-president at Mason State Bank.
Helen, 54, spokeswoman for the family, is a legal secretary with the Lansing law firm of Foster, Swift, Collins and Coey.  Robert, 50, used to work at Lindell Drop Forge in Lansing, but now takes care of the house, four cats and the property.  Though the family owns the farm, none of them has actually farmed the land for some time.  Lyle did some work on it during the late 1950's,  Helen said, but his work at the bank took up most of his time.
Wilson Force, 1842 Simmons Road, Mason, married a cousin, Pauline Riggs, and Force, along with his son, Stanley, work the farm.  The Riggs family receives one-third of all cash crop profits.
The house in which they live was built by grandfather Robert in about 1915, Helen estimates, for about $3,000.00.  Some of the woodwork -- including a shiny, pillared entranceway from dining to living room -- came from the oak trees in their own woods.
The family acknowledges the historical values of their home, but doesn't regard it as a monument.  "I just don't think of it as historical," Helen said. "it's just the house we live in."
She applied to the Michigan Historical Division in November, 1978, however, thinking that some recognition should be made.
"I was never formally contacted by the division,"  she said.  "We just received the certificate designating our farm as a Centennial Farm."
There are fond memories here, also.
"Margaret loves the farm and so do her three children," Helen said.  "Margaret's daughter, Janet, comes through to spend a week sometimes during the summer, and Harold and Margaret love to visit, too."
What they especially enjoy about the farm is "just the freedom of living in a rural part of the country,"  she said.  "There is peacefulness and quiet here."
"We can watch and feed the birds, and watch deer the year around, too,"  she added.
"Always keep the land," their grandfather Robert used to tell them, Helen said. "There is not going to be more of it."  The family appears to have a quiet determination to do so.
"We've grown up with this," she said.  "We miss it. We're happy to go away, but we're always happy to come home."
"We have a rich heritage here," she said.  "We'd like to keep it as long as we can."