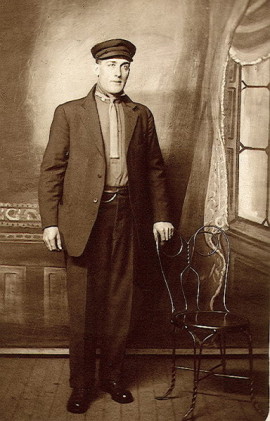 The photo is of Henry Robert Lundy.

In the records of the State of Michigan, Saginaw County, Maple Grove - under Michigan Births 1867-1902 -  It states that his name was Robert H. Lundy.  Henry Lundy's death certficate states that his place of death was Midland, Midland County, Michigan and his birthdate was 18 June 1883.


Henry Robert Lundy's WWI Registration Cards states the following:  He was 37 years old at the time Henry made out his draft registration dated on September 12, 1918.  Henry lived with his wife, Nellie at New Lothrup, Shiawassee County, Michigan.  Henry was a self-employed farmer and birthdate was June 18, 1881.    He checked that he was of medium height, medium built, blue eyes and dark hair.

In the 1920 United States Census - Henry and Nellie were living in Hazleton West (later known as New Lothrop), Shiawassee County, Michigan in Section 6 of that township.  Henry is 37 years old and Nellie is also, 37 years old.

Henry passed away at the age of 47 years old.  He is buried in Section P of Oak Hill Cemetery, Owosso, Michigan.  (Section 24)﻿ 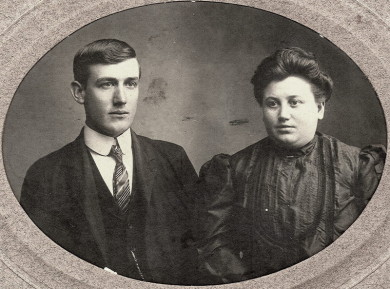 The photo is of Henry and Nellie Lundy.

The Henry Lundy information and photo's by Henry and Carl Henderson.  Researched by Jackie Rohde