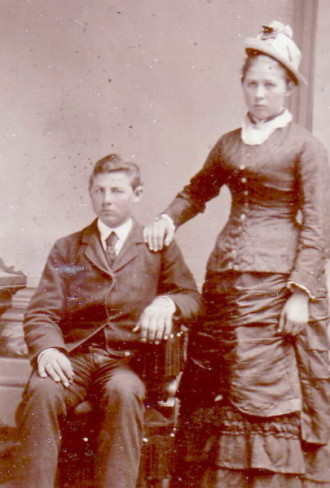 Leslie and Abbie had the following children:

Leslie Rigg was a young man when moving to Alaiedon Township, Ingham County, Michigan with his father, mother and siblings in 1855.  Leslie was born in Harrison County, Ohio changing to Carroll County, Ohio later on.  Leslie and his family moved to Lykens Township, Crawford County, Ohio sometime after 1848.   He lived in the Alaiedon Township area most of his life but moved to Gratiot County in 1880. Leslie married Sarah Ann Abbie (Shaw) Rigg on September 5, 1858 in Stockbridge, Michigan.

***According to a Land Plat Map of 1859, Leslie Rigg owned property in Section 13 of Alaiedon Township in Ingham County, Michigan on Every Road. Leslie owned 40 acres, adjoining his property to the south was 40 acres owned by Austin Rigg, and adjoining Austins property to the south was 80 acres owned by Robert Rigg.  A description of what  land landowners dealt with about their land was written on the back page of the 1860's U.S. Census Mortality Schedule of Wheatfield Township, Ingham County, Michigan.  The following were the remarks:  Water limey soil - clay and sandy loam - bolders, timber - maples, beech, basswood, whitewood, elm, ash, some oak and hickory - Season - very cold, June and July frost - another in August - crops almost destroyed - including grass - crops this season very abundant

***Leslie Rigg registered to vote in Alaiedon Township,Ingham County, Michigan on April 4, 1859, he registered as a Republican.

***Leslie and Abbie moved to Jackson County, Michigan sometime after their son, Ephraim died in August of 1859.    Ada Rigg was born in August of 1861 in Spring Arbor Township, as was Effa and George later on.   Leslie moved his family back to Alaiedon Township in Ingham County, Michigan when he purchased another 40 acres of land in Section 14 on May 2, 1866 (directly across the road from his previous farm) from Charles H. Sackrider for $450.00.  During this time  Leslie's father, Robert Rigg must have died because his property went up for public auction sale on April 3, 1866.  In December 1865 an Ingham County Probate Judge ordered the sale of the property for the use of his minor children, Hiram and Martha Rigg.  Leslie's oldest brother, Austin bought the property.  Leslie sold his property in Section 14 to Allen Richards on September 11, 1873 for $1,225.00.   Leslie bought another 40 acres in Section 23 on Holt Road from Adrian Watkins on September 12, 1873 for $1,250.00; this property was directly to the east of Austin's.  On June 8, 1880 he sold the property in Section 23 to William Brenner.   Leslie and Abigail's children, Herbert, Anna, and Lafayette Rigg, were born in Alaiedon Township during this time frame.

:  ***The Book "Pioneer History of Ingham County Volume I" compiled and arranged by Mrs. Franc L. Adams, Secretary of the Ingham County Pioneer and Historical Society, states the followingDistrict No. 6, Alaiedon, written and read by Mrs. Fred Brenner - As the East became more thickly populated they turned their faces Westward, many finding a haven in our own Michigan.  Among the early settlers were the Riggs families, Leslie and Austin living close to the school in Alaiedon School District #6 called the German School.*** 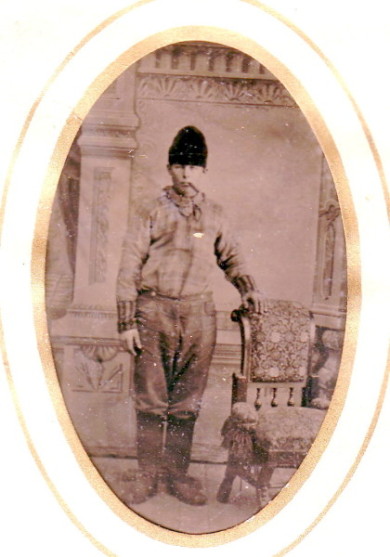 The tintype photo is of Leslie Rigg 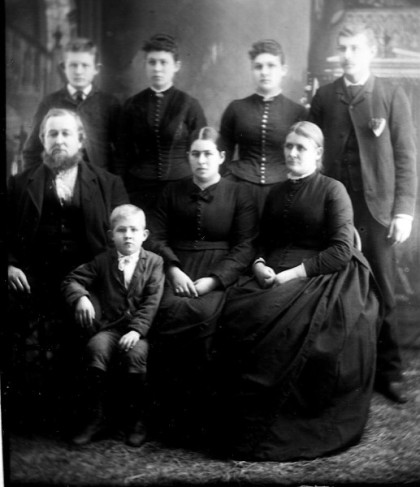 ***Leslie Rigg, having sold his 40 acres in Alaiedon Township, Ingham County, Michigan and purchased 80 acres in Gratiot County on Wisner Road, between Tyler and Harrison Roads, in Emerson Township, Michigan.  According to a warranty deed dated June 21, 1880, Leslie purchased 80 acres on the South half of the North East quarter of Section Thirteen in Town Eleven North of Range two West for $1,800.00 from Amos D. and Ann O. Olds.   In 1880, Leslie and Abbie's last child, Jake was born.  Two of Leslie's farms were each in Section 13 of their counties and both of these Section 13 properties were five miles from their respective county seat.

***NEWSPAPER ARTICLE DATED AUGUST 18, 1955 in the Gratiot County Herald Newspaper** EARLY HETZMAN SCHOOL HISTORY IS RECALLED BY AMOS HETZMAN --  "The records of school district No. 8, Emerson Township, Gratiot County, from 1882 are written in a beautiful hand.  Also, Amos Hetzman, who was 88 years old was interviewed and apparently he was the only living person who was enrolled in school when the school was first organized.  The newspaper article states " The school inspectors of Emerson formed a school district including section 13, 23, 24, and 14, except the N. 1/2 of the N.W. 1/4 of Section 13.  The first meeting was held at the home of Louis Hetzman on March 17. 1882.  A report of the qualified voters was given and Louis Netzman was elected moderator:  John L. Smith director; James H. Bailey, assessor.  March 27, 1882, a special meeting was called.  They decided to "Fix a house and surroundings belonging to L. Hetzman, suitable for school purposes.:  They assessed a tax of $100 to defray expenses.  They decided to have two months fall and two months spring term of school.  The board was instructed to purchase a "long acre, 10 rd. by 16 rd., for a permanent school site."  The Hetzman house was log and located on the S.W. 1/4 of S.W. 1/4 of Section 13.  Levi Chriswell "put the house in shape" for $45.00. LESLIE RIGGS cleaned the grounds for $4.25."
HOME MADE BENCHES - They adopted harpers series of books; purchased a stove for $30 and some hardwood for 75 cents a cord.  With homemade desks and benches, they were now ready for school.  The following pupils enrolled in the spring of 1882:  William Cobb, Amos Hetzman, John Hetzman, William Hetzman, Fred Bailey, Hattie Bailey, Grace Peet, Rose Peet, a boy Peet, ANNA RIGGS AND LAFAYETTE RIGGS."

ALSO, IN THE NEWS ARTICLE it stated:  "At the annual meeting in September, 1985, they hired Almeda Curtis to teach two terms at $18 and $19 per month.  At this meeting they voted to build a frame house 28 x 38 feet (the present house) also voted to raise $200 for this purpose.  Anson Eldred, Henry Cobb, LESLIE RIGGS, WERE TO SERVE ON THIS BUILDING COMMITTEE without pay".

***ANOTHER NEWS ARTICLE ON THE HETZMAN SCHOOLS STATES:  "The inside of the Hetzman house was painted with lime and sand mortar with the outside done in mud.  The job was done by LESLIE RIGGS in 1883, for $6.  A well was dug also." "In September 1885, the district voted to build a frame school house 28 x 34 ft., and to raise $200 for those purposes.  The building committee included Anson Eldred, Henry Cobb and LESLIE RIGGS.  Every stick of timber, etc., was voted by a single motion.  As three piers under sills, oak joists 2 x 8, sill 8 x 8, pine sheeting, maple flooring, 1 and 1/2 x 2 inch layered on edge.  Red oak wanes coating, pine or hemlock studding, basswood siding, eight windows with eight lights, 12 x 16." 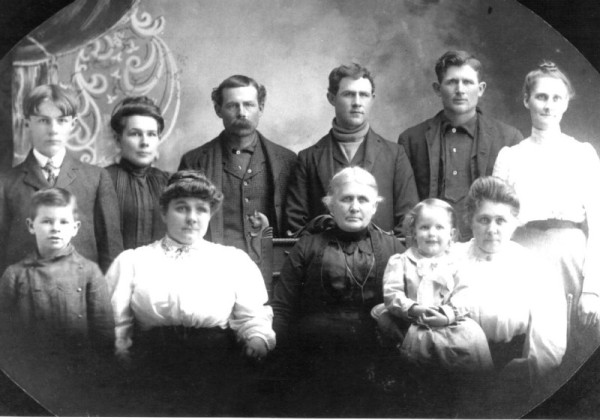 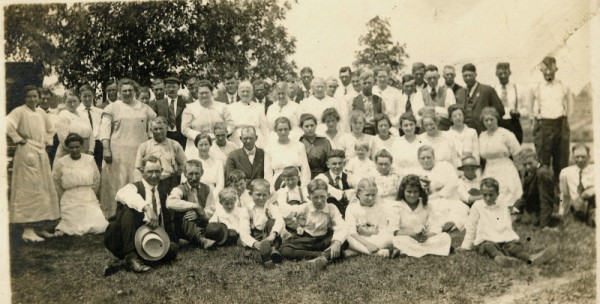 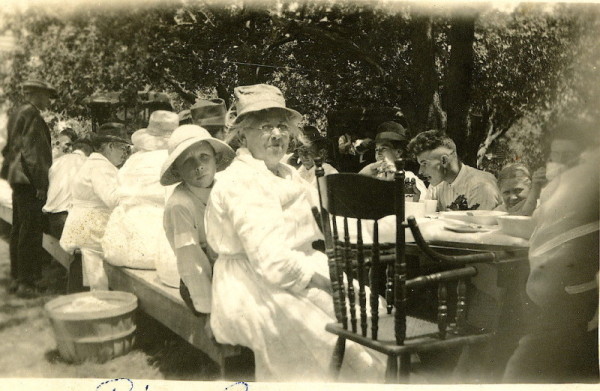 The photo is of a Rigg Reunion - photo taken between 1918 and 1920 - rightside: Irene Symonds, one of the Miller sons, another Miller son,  and Leslie Ackley.  leftside: Effa Rigg Parker, Leslie Parker, ?, Anna Rigg Ackley, ? and in background, Lafe Rigg, man standing ? 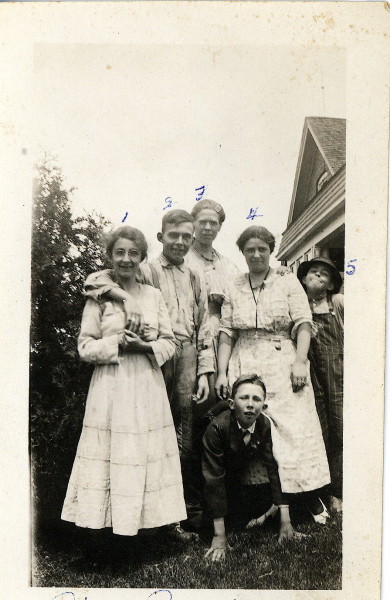 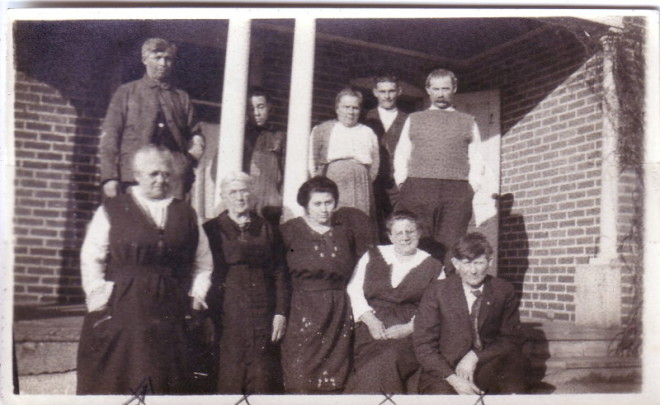 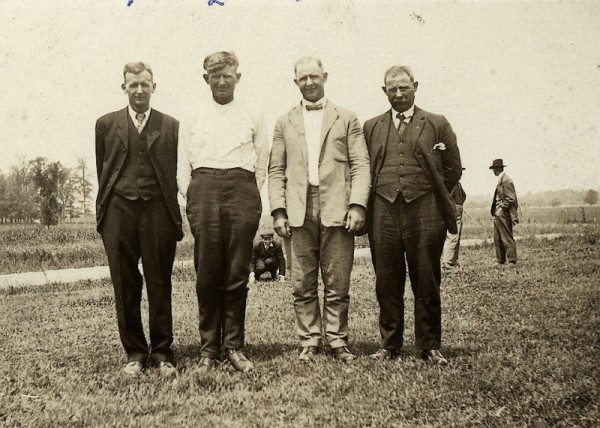 The photo is of left to right - Herbert Rigg, Lafayette Rigg, Jake Riggs and George Rigg. 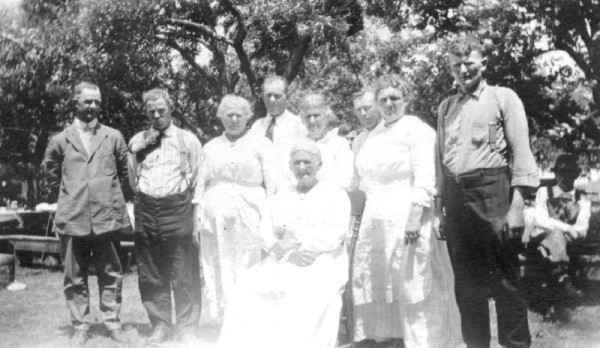 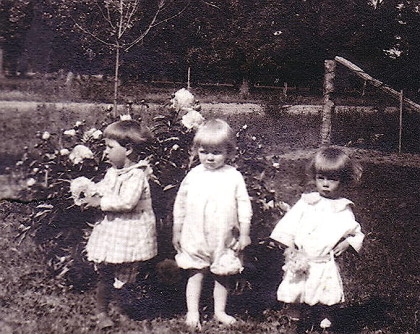 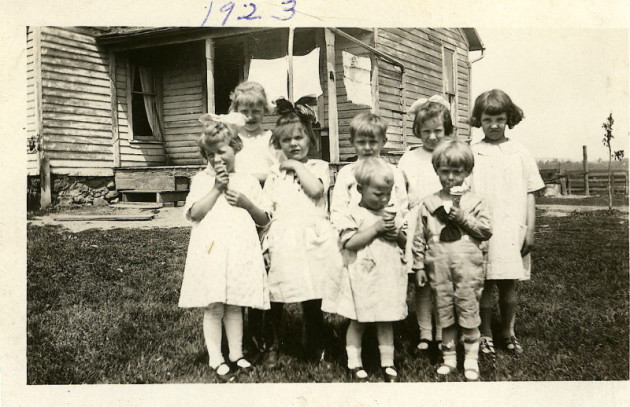 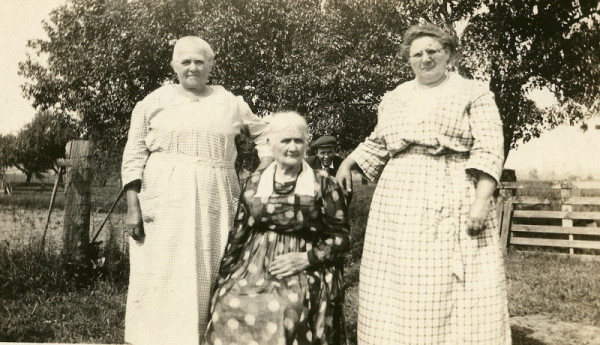 The photo is of - left to right - Effa Rigg Parker, Abbie Shaw Rigg/Riggs, Anna Rigg Ackley.  An Ackley boy in the background. 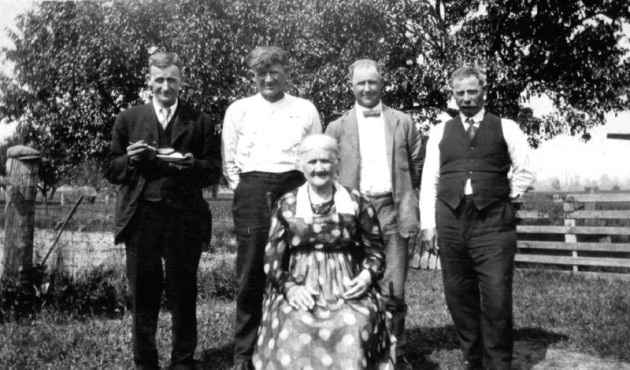 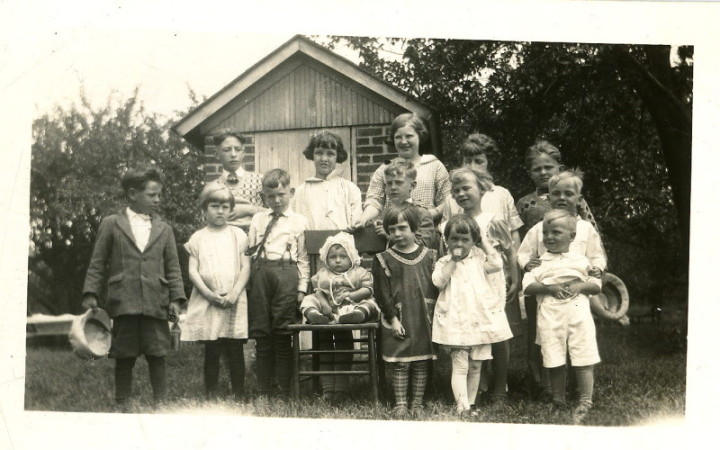 This is a Robert Rigg Reunion photo.  The photo was taken at the Rob Riggs home on Holt Road in Alaiedon Township, Mason, Michigan. 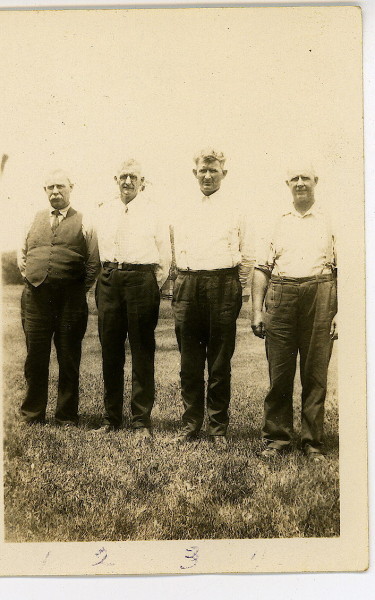 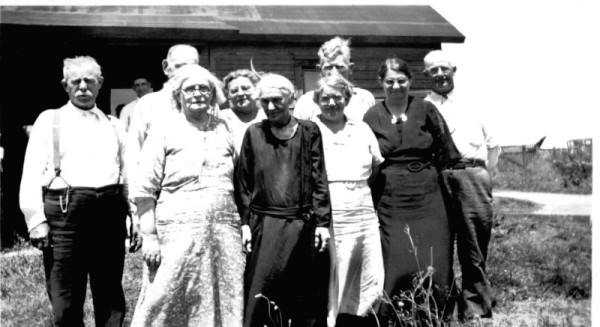 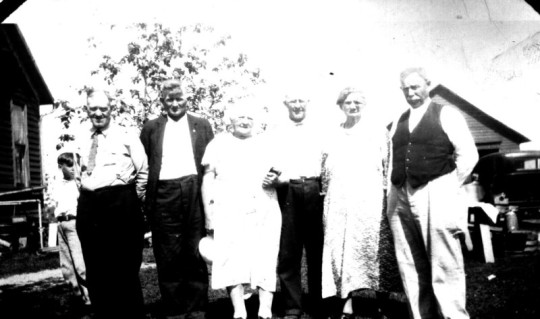 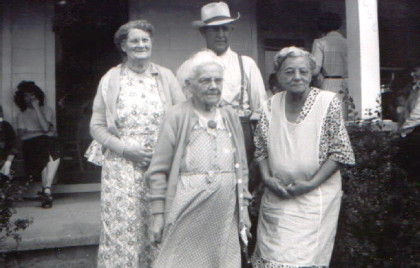